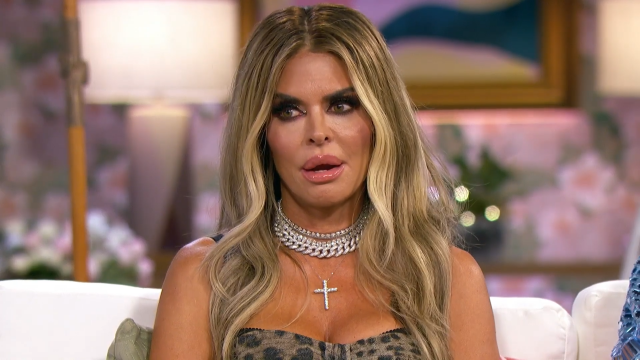 We always knew that this RHOBH Reunion would be brutal for Lisa Rinna in particular.

She has engaged in feuds left and right, at times locking horns with former friends.

But one comment has earned Lisa a callout from a surprising new foe.

Lisa has now made an enemy of the American Institute for Cancer Research. Yes, really.

So, Lisa Rinna spilled a lot of what Kathy Hilton had told her.

She came up with a particular justification for why she hadn’t kept an ostensibly private conversation private.

Lisa’s explanation? That if she didn’t open up about it, the strain of holdin g it in would make her “get sick and get cancer.”

It is true that certain types of illnesses may be linked with prolonged psychological stress, because stress impacts the rest of the body.

(And sure, in general, mindset has more impact over certain types of cancer than it does over things like heart disease)

But Lisa casually name-dropping the name of a devastating ailment that has cost countless lives isn’t going over well.

Obviously, many fans and viewers of The Real Housewives of Beverly Hills are cancer survivors or have loved ones who battled the disease.

In fact, it’s safe to say that many of Lisa’s own fans, who watch the show in part just for her, fall into those categories.

But Lisa did more than just alienate some RHOBH diehards. The experts are weighing in.

The American Institute for Cancer Research sounds royally peeved to hear Lisa Rinna misuse her massive platform like this.

A rep for the institute told TMZ that Lisa is “just using the specter of cancer as emotional blackmail.”

Lisa is doing this, the rep speculated, “to justify airing her grievance.”

We mentioned that stress can impact health, which is true.

But the American Institute for Cancer Research shares that there is no strong evidence to support stress as a cause of cancer.

Holding stress, especially when expressing it physically through muscle tension, is not good for you. But the AICR says that it’s unlikely to grow tumors in your body.

If Lisa Rinna literally believes what she was saying, then the American Institute for Cancer Research is concerned.

Her statement, the organization says, is “certainly not based on reputable research.”

Lisa, they argue, “has taken a popular (but likely false) concept” and is promoting medical misinformation, whether she means to or not.

Obviously, not all medical misinformation is dangerous. Carrots have a tangential at best relationship to eyesight, but believing otherwise is seldom harmful.

In contrast, anti-vaxx, anti-mask nonsense kills untold thousands. And who knows what damage Dr. Oz has allegedly done to his viewers over the years.

We’d say that Lisa isn’t on that level. If anything, she gave the American Institute for Cancer Research an opportunity to educate us all. Albeit, not intentionally.

Renée Webster Discusses the Relatable, Human Story of “How to Please a Woman”