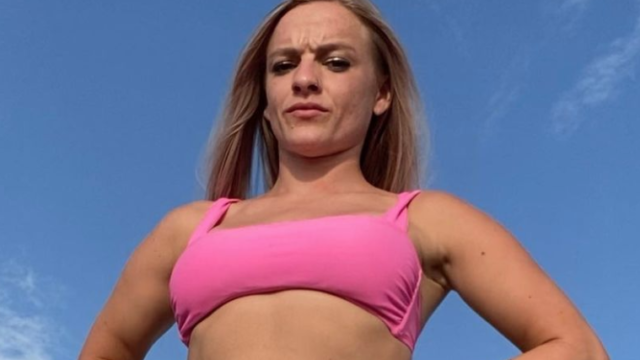 Mackenzie McKee has been through a lot these past few years …

But it sounds like very, very soon, she’ll drop a considerable amount of dead weight from her life.

Last month, Mackenzie announced that she was divorcing Josh, her husband of nine years and the father of her three children.

It didn’t exactly come as a surprise — this is hardly the first time she’s said that she and Josh were over.

In 2019, she publicly called Josh a “horrible person” and claimed that he’d cheated on her.

A few months later, he re-proposed to her and they got back together.

A few more months passed, and in that time, Mackenzie’s mother, Angie, passed away after a horrific battle with cancer.

It had turned out that during that extremely delicate time, Josh had been speaking inappropriately with Mackenzie’s own cousin, so she left him again.

And she left him left him — she took the kids and left their home in Oklahoma to start a new life in Florida.

But it didn’t take too long for Josh to drag himself out there too, and before long they were back together once again.

It was almost like she was bragging about it, like they’d been so awful to each other and still managed to stay together, like it was impressive or something.

But here we are, on the tail end of the summer of 2022, and it appears that once again, love is dead for the McKees.

And this time, it just might be for real.

After making comments about how Josh had been emotionally abusive to the point where she’d become suicidal, she decided to make a video to give an update on how things were going.

After a lengthy intro — if you’re at all familiar with this girl, you know she likes to talk — she plainly said that she and Josh are divorcing, and that their house in Florida now solely belongs to her.

“It is very close to being done and finalized,” she said of the divorce, which is good for her.

She acknowledged that he’d cheated on her and that she hadn’t always been “the best wife,” but that “all in all, we are both walking away from this marriage with deep wounds and scars.”

Mack recapped the past few years and the issues that happened in her marriage, and she said that she was scared for a long time to really leave him because she didn’t want to be lonely and she didn’t want the kids to lose their family.

“I knew Josh was going to go back to Oklahoma, which is currently what the situation is,” she revealed.

“In the end, we aren’t each other’s people,” she continued. “We aren’t meant to be, which is hard to admit because I carried three of his kids.”

Weirdly enough, she also said that “In the end, Josh said ‘I’m so proud of you for actually having the courage to leave and do it because nothing was ever going to change, I wasn’t going to change.’”

What a charmer, right?

On the bright side, she said that they are doing well with coparenting so far, and they’ve been “respecting each other’s dating lives.”

It seems like she doesn’t want to bash him or speak negatively about him at all anymore, which is concerning because in the past that meant that she was getting ready to take him back.

Then again, later in the video she asked her fans to purchase one of her fitness programs if they wanted to support her at all, because “this is rough.”

“I’m now a single mom with three kids, pretty much all on my own,” she explained.

“They will see him on school breaks, and it is what it is.”

Another good thing about the divorce is that they haven’t been fighting at all about anything — she said they’ve been going through a mediator and agreeing about everything, so they’ve been able to avoid any messy, drawn out court proceedings.

All in all, it does seem like Mackenzie is doing well, and that she’s looking forward to this next chapter in her life.

Are you happy for her?