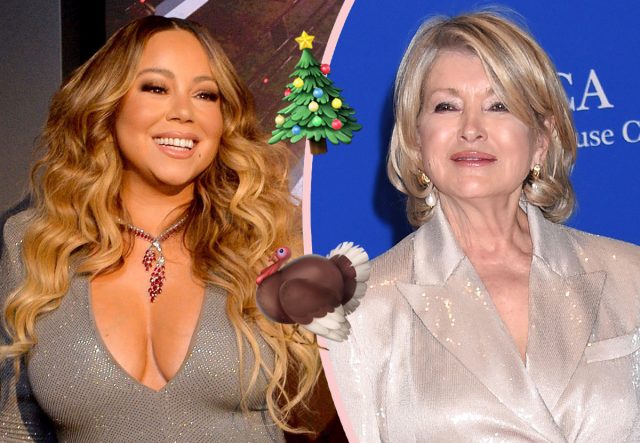 Mariah Carey is pop culture’s reigning Queen of Christmas, annually getting back in the charts with her all-timer All I Want For Christmas Is You. But this year she decided to expand her empire, so to speak. On Tuesday, the day after Halloween, she posted this video officially declaring it Christmas season:

Almost two full months before December 25 — and already Christmastime?? Kinda feels like she skipped something, right? Like… all of November? Thanksgiving?? Christmas season used to start in earnest on Black Friday, then Black Friday started at 7 p.m. on Thanksgiving Day, now we’re skipping the whole month??

Well, one person who won’t stand for it is Martha Stewart. The cookbook author visited the Today show on Thursday and took a moment to address Mariah directly over her Thanksgiving erasure, saying:

“You cannot give up Thanksgiving!” @MarthaStewart makes a plea to @MariahCarey to slow her roll after the singer posted a video on social media celebrating the end of Halloween and skipping straight to Christmas.

Mariah, what do you say? pic.twitter.com/dWDGVuqtYX

Wow! They really lit the fuse for daytime TV, didn’t they?

Well, if you thought the originator of “I don’t know her” was going to let that go without a response, you don’t know the Elusive Chanteuse very well! Mariah tweeted back later that evening:

“Dearest Martha!! NEVER will I give up Thanksgiving!! But we can still start getting into the festive spirit now!”

OK, it’s not combative. But it does kind of feel like she’s angling for a little sumpin sumpin with her next comment, as she adds:

“PS I’d love to have you at my Thanksgiving dinner although I’ve yet to be invited to your Thanksgiving extravaganza! And THAT is MAJOR! Esp if Snoop’s coming!”

Dearest Martha!! NEVER will I give up Thanksgiving!! But we can still start getting into the festive spirit now! ???? P.S I’d love to have you at my Thanksgiving dinner although I’ve yet to be invited to your Thanksgiving extravaganza! And THAT is MAJOR! Esp if Snoop’s coming! ???????? https://t.co/zrTNaevTTM

OMG, she invoked Snoop Dogg! Ha! That whole “I’ve yet to be invited to your Thanksgiving” is so shrewd we cannot even get over it! Mariah may not just squash this beef, she may end up getting herself an invite to the most exclusive Thanksgiving celebration of all time! We’ll just have to wait and see how Martha responds…

Now in the meantime, tell us, Perezcious readers… whose side are YOU on? Are you down with brushing past Thanksgiving and getting into the Christmas spirit?

Listen To This: You’re Too Good To Be True!