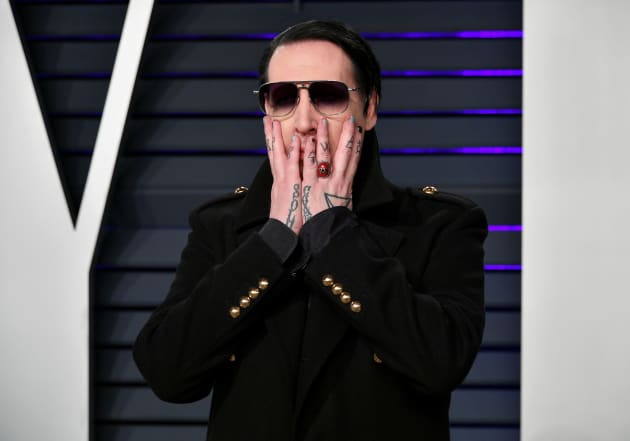 If you’ve been paying any attention to celebrity gossip in recent weeks, you know that Marilyn Manson’s reputation has taken quite a nosedive.


And that’s really saying something, as the shock rocker didn’t enjoy the greatest reputation to begin with.


Manson’s troubles began when actress Evan Rachel Wood accused him abusing her over the course of their four-year romantic relationship.


“The name of my abuser is Brian Warner, also known to the world as Marilyn Manson,” Wood’s statement read.


“I was brainwashed and manipulated into submission. I am done living in fear of retaliation, slander, or blackmail,” she continued.


“I am here to expose this dangerous man and call out the many industries that have enabled him, before he ruins any more lives.


After Wood alleged that she had suffered intense trauma as a result of the relationship, four other women accused Manson of similar atrocities.


These days — with his career in ruins and the possibility of criminal charges looming — Manson is reportedly living in seclusion, overwhelmed by intense paraoia.


“Manson is worried about his safety and is not taking any risks,” a source close to the situation tells UK tabloid The Sun.


“He’s concerned about who might turn up at the house and has hired 24-hour security to watch out for him,” the insider adds.


“He’s paranoid at the best of times, but the allegations have really rocked him and he was adamant he needed protection.”


While many of Manson’s friends and colleagues — including his longtime manager — have distanced themselves from him in recent weeks, it seems that a handful of sycophants have remained.


“Manson still has close friends and team members who have been with him for years and are worried about him, but a lot of people have turned their backs,” the source continues.


“He is unsure of what’s to come regarding his career and is keeping an incredibly low profile.”


Last week, LAPD officers visited Manson’s home in response to a request for a welfare check, but they left after a friend reported that the singer was not in any danger.


“Manson has always been a hermit who often sleeps in the day and parties or paints at night into the early hours, so it’s unlikely he’ll be seen in public for a while,” says the insider.


Of course, when we hear that Manson has been staying up all night in the throes of a dangerous paranoia, we can’t help but think about his well-known history of substance abuse.


Just last week, another former girlfriend of Manson’s — Game of Thrones actress Esme Bianco — shared a shocking account of the drug-fueled abuse she endured at the hands of her ex.


At one point she revealed that the drug use began immediately after Manson awoke, and he reguarly consumed absinthe and cocaine “for breakfast.”


Other former associates of Manson’s have leveled similar allegations, including Nine Inch Nails frontman have spoken openly about Manson’s addictions.


“He is a malicious guy and will step on anybody’s face to succeed and cross any line of decency,” Reznor said.


“Seeing him now, drugs and alcohol now rule his life and he’s become a dopey clown.”


Little is known about the current state of Manson’s drug use or mental health, but it’s safe to assume that he’s not in a good place.


And he’s likely well aware that the worst is yet to come.

90 Day Fiance Fans BOYCOTT Discovery Plus: Why Are Viewers Outraged?

Shehnaaz Gill reveals she is not ready for marriage amid rumours of relationship with...

Vanessa Hudgens SLAMMED On Twitter For Posting Fun Scotland Pics In The Middle Of...