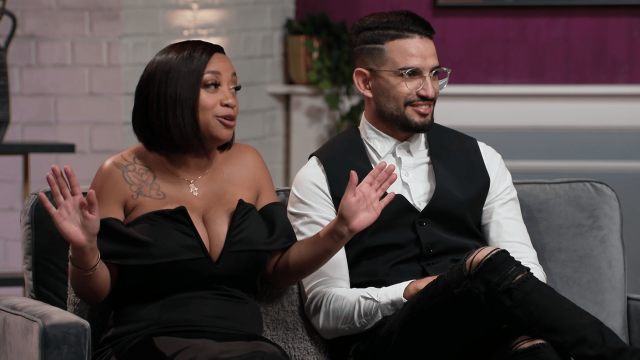 90 Day Fiance: Before The 90 Days fans have heard a lot of rumors and more about Hamza and Memphis’ bitter custody battle.

It’s no surprise that they’re locking horns. Their split was so contentious that they didn’t appear on Happily Ever After? despite filming for the season.

Just days ago, Hamza spent time with their daughter. He also had a court date.

Following the trip to family court, he seemed in despair. And Memphis was nothing short of thankful. What happened?

Officially, neither Memphis Smith nor Moknii Hamza have told the world the reason for their breakup.

We know that it happened — after they filmed the Tell All, but clearly some time very early this year.

Eyewitnesses saw the two of them filming together, in Michigan. Likely, their abrupt split and exit from the franchise is why Kimberly and Usman are on Happily Ever After? without even an engagement.

The closest thing that we have gotten to an explanation for the split have been posts from Hamza’s sister, Rawia.

She has spoken about Memphis spending time with her ex, who is a co-parent of her children. As we saw on the show, Hamza seems to have jealousy issues. There are also cultural differences at play.

Naturally, this comes from Rawia. As Hamza’s sister, she is not a neutral party. Additionally, any information that she has comes from Hamza — particularly post-split.

However, for some time, Hamza has been living in Chicago. We do not know the exact reasons for why he spent this time in another state.

Meanwhile, their daughter has been living with Memphis.

Only recently, Hamza returned to Michigan. He expressed distress more than once over the custody situation and voiced hopes that it will change. But obviously, people have questions.

Just a few days ago, Hamza posted to Instagram with a significant change in his mood.

He shared photos that one can only assume depict his baby daughter — though of course he hid her face with an emoji.

Hamza’s face remains visible, however. He is positively beaming in the pic.

“Today is the HAPPIEST DAY of my life,” Hamza gushed in the caption.

“I got to see my precious, beautiful, sweet baby girl,” he raved. “My daughter, my heart, my princess.”

Hamza expressed: “After such a long time away from her, my time with her filled me with such joy. I can’t wait to see her again.”

He was clearly looking forward to an upcoming family court date.

In fact, there is speculation that he was spending time with their baby girl in a court-designated playroom, but no one has confirmed that.

On an all black background, he simply wrote: “Today I had a court.”

He followed that with three broken heart emojis. Clearly, he did not receive the news for which he had hoped.

Meanwhile, Memphis Smith had a different take on … something.

Memphis makes no secret of her Christian beliefs, and often posts fairly vague messages using the language of her religion.

“God is good!” she announced alongside a string of other affirmations. One might imagine that she was celebrating happy news.

It certainly appears that the ball is in Memphis’ court in matters of custody. At least, for now.

We wish that we could explain more of what is happening, but both Memphis and Hamza have not chosen to share.

It is best to remember that they do not owe us explanations. And also that contracts or even court orders may prevent one or both of them from sharing details.