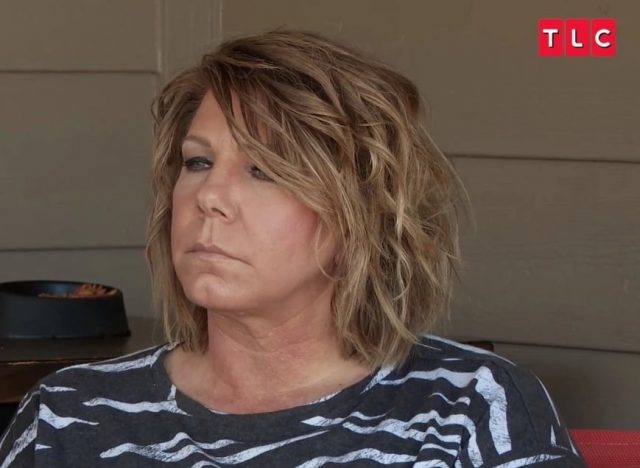 Meri Brown gets it.

Meri Brown knows what Christine Brown is going through.

When it comes to a loveless and intimacy-free relationship, Meri Brown has Christine beat by a number of years — she hasn’t slept with Kody in a decade!

But there is a major difference between Meri and Christine, as will be illuminated on this Sunday’s brand new episode of Sister Wives:

Meri has stuck around.

Just about a year ago, Christine made the choice to leave Kody, announcing this development to the public in November 2021.

Season 17 of Sister Wives was filmed around this same time, with Christine’s monumental decision taking center stage on each episode so far.

This will remain the case on October 30… when Meri and Robyn sit down to talk about the bombshell.

“I just don’t want to admit or even accept the idea that it’s just whatever we had as a family is gone,” Robyn tells Meri in a sneak peek posted by Entertainment Tonight.

Both women grow very emotional during the discussion.

“It’s just so familiar,” Meri admits, with tears in her eyes. “And I’ve seen Kody give up on me and him.”

Indeed, Kody has come right out and said — on multiple occasions, no less — that he no longer has any romantic interest in his first spouse.

Continues Meri on this topic via the aforementioned clip:

“People are always asking me, like, ‘Why do you stay? You don’t have a relationship with him.’”

On a near-weekly basis, Meri tries to post something on social media that makes it evident she’s happy on her own… even if she isn’t truly on her own.

“I’m just grateful that you’re sticking it out,” Robyn says in response on this upcoming episode, adding in this heartfelt back and forth:

Meri goes ahead and echoes this sentiment — and while Robyn remains optimistic, she tells the camera that the vision she’s had for her future has been ruined by both Meri and Christine’s fractured relationships with Kody.

“I had other choices…this is what I wanted,” Robyn explains through tears. “I just have to watch as they destroy what I’ve wanted. I just can’t let it go.”

As previously mentioned, Christine confirmed her decision to break up with Kody last November after a challenging few years.

“After more than 25 years together, Kody and I have grown apart and I have made the difficult decision to leave,” she said back then.

“We will continue to be a strong presence in each other’s lives as we parent our beautiful children and support our wonderful family.”

In response, Kody uploaded his own statement on Instagram, writing:

“Christine’s decision to leave comes with a great deal of sadness. We enjoyed many years together and I have a large amount of respect and admiration for her.

“Although we are moving forward on different paths, we will always remain committed parents.”