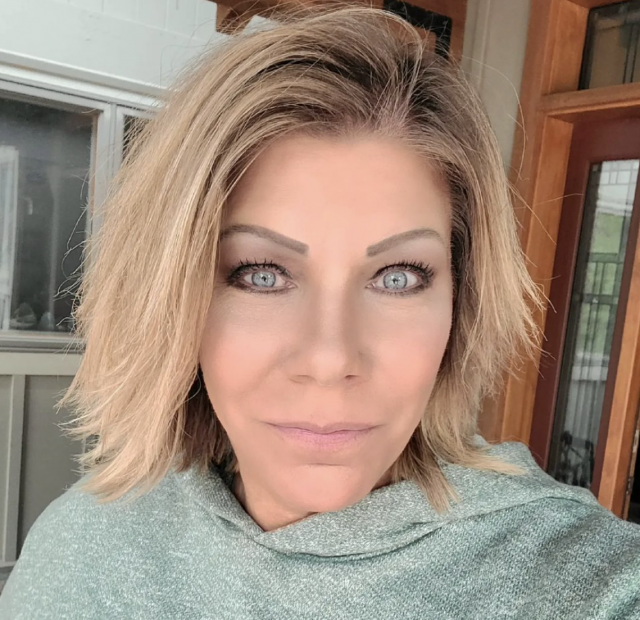 Meri Brown is back to doing what she does best:

While hinting that she has next to no relationship with spiritual husband Kody Brown.

“Think about this for a second….” Meri wrote to open a lengthy caption to the photo above on Thursday.

“Who is the most important person in your life? Who would you do anything for, drop everything for? Who cheers for you, has your back, gives you all the pep talks?

“Who makes you feel happy and secure when you’re in their presence? Who would you defend? Who do you value the most?

“Who do you talk up and cheer for the most?”

Many people might respond to Meri’s series of questions with an obvious answer: Their significant other.

But that’s not where Brown went with this entry.

Anyone who has been paying almost any attention to the Sister Wives universe over the past several months knows that there’s nothing significant at this point between Meri and Kody.

The supposed couple hasn’t had sex in 10 years.

“Did you say YOU?” Meri continued in her latest post.

And it’s a point Meri has been trying to drive home for ages now, as she constantly talks up the important of self-confidence and self-esteem, and also of embracing change.

Acting as a cheerleader for those who follow her, Brown concluded:

Cheer yourself on! Talk kind to and about yourself! Give yourself pep talks and tell yourself how grateful you are for YOU! Feel secure with yourself and LOVE yourself! Stand up for yourself in truth and love. Value yourself.

You are worth it!

One week prior to the Sister Wives Season 17 premiere, Meri reflected on how she was “living [her] best life while learning, growing and leveling up.”

Moreover, she had taken up a new hobby on her never-ending journey.

“I boxed for the first time,” she captioned an Instagram post on August 31, alongside a snapshot of her jabbing a punch bag.

“I asked [instructor] Danelle, ‘Are we supposed to be envisioning ‘someone’ while we’re boxing?’ Another tactic or tool some would recommend, but I just wasn’t comfortable with that. She said, ‘No! You’re fighting for yourself!’

On the new season of Sister Wives, all of the Browns are dealing with the fallout of Christine deciding to walk away from Kody.

And although Christine has since admitted she isn’t close to Meri, that doesn’t mean any of this is easy for members of the polygamous household.

“Christine was more than a sister wife. I felt like she was a friend for a lot of years,” says Meri in a scene from Season 17.

Christine, however, appears to feel differently in a scene of her own that we watched via trailer.

“The relationship, like, how I have with Janelle is probably going to stay like that,” Christine says on the September 18 episode of Sister Wives.

“How not very close I am with Robyn and Meri is gonna stay like that too.”