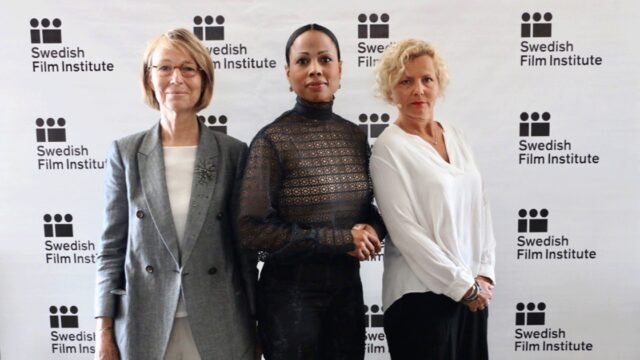 A new study released by the Swedish Film Institute, entitled “Which Women?,” has determined the Swedish film and TV industry can do a lot better when it comes to representation and diversity. According to a press release, the qualitative report is based on “19 in-depth interviews with established female actors, directors, producers, and screenwriters” aged 27 to 66 and finds that “the industry is at risk of losing relevant talent and missing out on important stories by continuing to reproduce stereotypical social imagery.” In short, there is potential for greater inclusion in Swedish entertainment, but it won’t be realized as long as stereotyping and bias go unchecked.

The report spotlights the current working conditions for older women and “women who are being racialized” — and the findings are sobering. Interviewees revealed that they are often further otherized by being “assigned the role of involuntary diversity experts, who are expected to educate the production team on set.” Typecasting is also a persistent problem “found in every part of the filmmaking process,” and ranges from stereotyping to exoticizing to outright neglect.

The interviewees also spoke about the industry’s obsession with youth and conventional beauty. If someone doesn’t fit those narrow standards, she is marginalized.

Things aren’t much better off-screen: “Which Women?” concludes that women in all positions are given smaller budgets to work with. Generally, projects made by women are “considered to have a lower audience potential and to constitute a greater financial risk.” Further, the entertainment sector is comprised of mostly freelance positions and contracts, “where personal networks are important for future job possibilities. This can lead to a culture of silence in which one is afraid to stand up against colleagues and decision makers.”

The less empowered women and other marginalized groups are on set, the more risk there is for abuse. Per the report, toxic work environments waste resources, energy, and time — it’s in the industry’s financial and moral interest to make sets safer and more inclusive.

Obviously, as “Which Women?” suggests, there is a lot that needs to be addressed in Swedish film. The potential for more equitable, inclusive representation is there, but reforms must be made on both sides of the camera before it is achieved. Here’s hoping we’re closer to that goal by the time the Swedish Film Institute releases its next gender equality report.

Check out the entire “Which Women?” study at the Swedish Film Institute’s website.

Trailer Watch: “Our Towns” Searches for Answers Across the U.S.