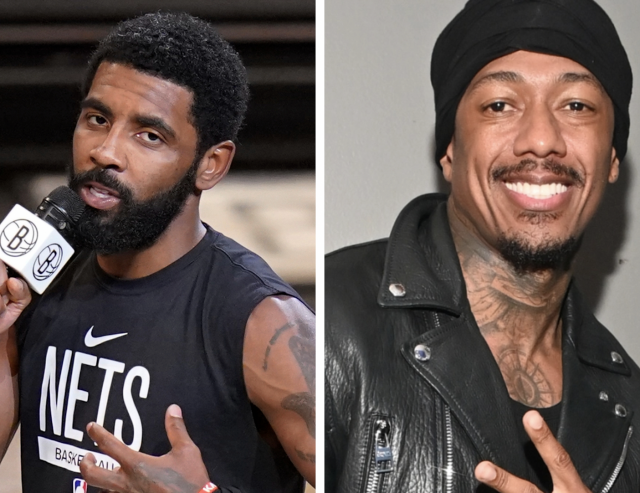 Sadly, many people predicted that this sort of thing would happen.

When Kanye West started spewing anti-semitic hate speech, there was a fear that he would pave the way for other influential figures to make similarly ignorant comments.

Irving has been suspended by the Brooklyn Nets for tweeting his support for a fact-free, Holocaust-denying “documentary.”

Countless celebs have condemned Irving’s statements, but not surprisingly, a few have come out to co-sign his idiocy.

One of them was longtime anti-semite and soon-to-be father of 12 Nick Cannon.

Cannon sat down this week for an interview with Anti-Defamation League CEO Jonathan Greenblatt, and shockingly, he defended Irving’s blatant bigotry.

“I can wholeheartedly say I know Kyrie Irving is not antisemitic,” Cannon told Greenblatt.

“When given the chance to say are you anti-Semitic or not, he didn’t say ‘No i’m not’ – at the press conference he said ‘Stop dehumanizing me,’” Greenblatt shot back.

Instead, he upped the ante by likening the Nets’ suspension of Irving to dehumanizing practices employed by slave owners.

Cannon accused the NBA and the Nets ownership of “buck breaking,” which, as he explained to Greenblatt, was a strategy that was used to discourage dissent and rebellion among slaves.

“Okay, I know that isn’t right, there’s a gigantic historical record. Jewish people know that when you dehumanize in this way, what is round the corner.”

“So in that statement — those are the tropes that dehumanize Jewish people — the same buck-breaking,” Cannon began, before Greenblatt interjected and asked him to define the term.

“The slave masters would bring the buck, the one that gets out of line, so all the other slaves would see lash after lash, showed them the power to set an example,” Cannon explained.

“This is what you must do to fall in line,” he continued.

Obviously, Cannon believes that Irving did nothing wrong, and that he’s only being disciplined so that other NBA players will be discouraged from making controversial statements.

The danger is that Cannon is both downplaying Irving’s undeniable bigotry and indirectly encouraging other players to make similarly “incendiary” statements.

In addition to his suspension, Iriving is required to undergo sensitivity training before returning to the court.

Cannon has condemned this requirement as part of “dehumanizing” effort to publicly degrade Irving.

For his part, Irving has yet to apologize for his offensive tweet, but he also has not condemned the Nets or the NBA for their disciplinary actions against him.

Where Is Daniella Karagach On ‘DWTS’? Why She’s Missing Bond Night – Hollywood Life

Usman Umar Breaks the News to Kimberly Menzies: You’ll Have to Be Wife #2!