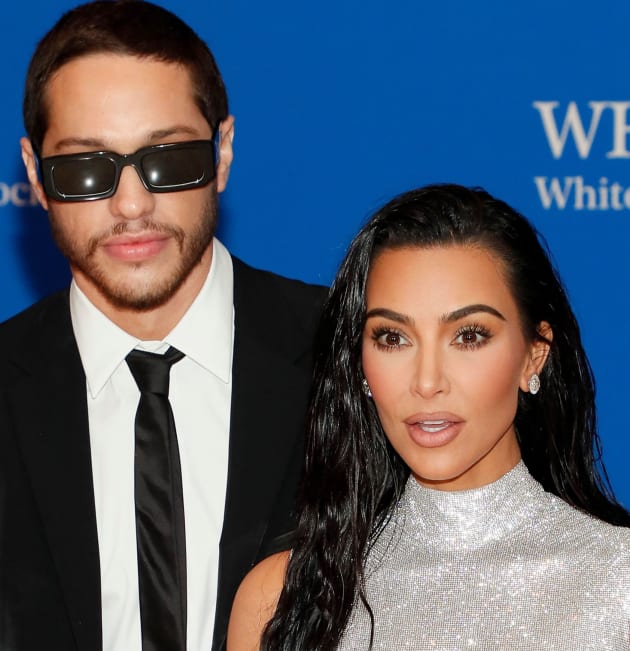 Pete Davidson and Kim Kardashian have made it official.


Several weeks after the comedian and the Instagram influencer posed for their first Instagram photo as lovers, they’ve gone ahead and taken another significant step in their courtship.


The appearance marked this twosome’s first-ever time on the red carpet as boyfriend and girlfriend.


Kardashian was invited to the event — which featured Trevor Noah cracking jokes on stage, followed by President Joe Biden also delivering a light-hearted speech in front of the press — on behalf of ABC as her new Hulu reality series, The Kardashians.


As you can see above and below, Kardashian look gorgeous in a form-fitting, shimmering silver gown… while Davidson played it cool in a black suit with matching sunglasses, a skinny tie and Vans.


He also whispered many sweet-nothings into his girlfriend’s ear and, according to bystanders, grabbed her butt on a couple of public occasions.


Kardashian and Davidson inisitaly connected at the Met Gala back in September 2021… when the former asked the latter for advice before her Saturday Night Live hosting debut about a month later.


They started dating in October 2021 and then made their Instagram debut in March via a series of PDA-filled pics.


Their romance marks the first time Kardashian has dipped into the dating market since filing for divorce from Kanye West, with whom she shares children North, 8, Saint, 6, Chicago, 4, and Psalm, 2.


The relationship has garnered quite a bit of attention, too.


Partly because this is Kim Kardashian and she makes sure that everything she does garners quite a bit of attention.


But also because West has not reacted favorably to his ex-wife moving on, even threatening to kill Davidson in multiple interviews and songs.


Last month, Davidson attended the premiere of The Kardashians alongside the KKW Beauty founder … but chose NOT to accompany her on the red carpet at the time.


At some point, Davidson may also appeared on this same program — but Kim has said neither is anxious for him to do so.


“I do think that I am holding a little bit more close to my heart on certain aspects of my relationship with Pete,” Kardashian told Hoda Kotb on her Making Space podcast last month.


“It feels good just to know that, like, we have this connection and we have our little bubble of a relationship world that we live in that, like, not a lot of people know about.”


Continued Kardashian in this interview:


“We were driving in the car yesterday and I just, like, looked at him and I was like, ‘Thank you.’


“And he was like, ‘What?’ And I was like, ‘For running errands with me, like, this is so much fun just to go to a doctor’s appointment or go to the dentist and just, like, run errands.


Just how serious is this fun, however?


According to at least one report, Davidson is thinking of proposing at some point in the near future.


With Kanye out there and lurking and often unstable?


We literally fear for Davidson’s well-being if he goes through with this romantic act.