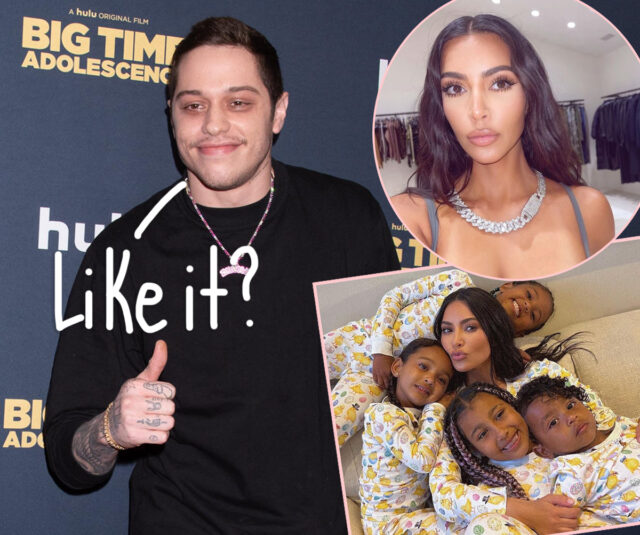 Pete Davidson appears to have got some more ink inspired by Kim Kardashian – but this time, it includes her four children! Yep, that is right!

The 28-year-old comedian was photographed leaving the Fonda Theatre in Los Angeles following his standup for the Netflix is a Joke festival on Friday, where fans quickly noticed the new tattoo that appears to read “KNSCP” in the photos. Social media users soon speculated that the letters seem to be the initials of Kimmy Kakes and her four children: North, Saint, Chicago, and Psalm. You can ch-ch-check out the pics HERE.

It is unclear when Pete got the tatt – but it definitely was not visible when the couple made their red carpet debut at the White House Correspondents’ Dinner over the weekend! Neither he nor Kim has confirmed if the fresh ink is a tribute to her little ones. If this does stand for her children, things are definitely getting more serious between them!

The King of Staten Island actor has recently been seen bonding with her family more and more – even starting up a bromance with Scott Disick. Earlier this month, Pete was also spotted hanging out with her and Kanye West’s eldest daughter as they drove around in a pink Moke car. He also developed a relationship with Saint, Chicago, and Psalm, with a source telling Us Weekly:

“Kim loves how great Pete is with the kids. He’s a big kid himself and makes them laugh.”

The new ink is, of course, not the first artwork the Saturday Night Live alum has got in honor of Kim. She previously confirmed to The Ellen DeGeneres Show that Pete has several pieces dedicated to their romance, including one that reads “My Girl Is A Lawyer.” The Keeping Up With the Kardashians alum said:

“I think my favorite one, it says ‘my girl is a lawyer,’ and that one is really cute.”

She may have a new favorite one now! But as we mentioned, that is not all…

In addition to the tattoo, Kim revealed on the daytime talk show that he even branded her name on his chest:

“I think he was like, ‘I want something that’s there that I can’t get rid of.’ He’s in the process of getting rid of his arm tats and neck tats so he’s like, ‘I don’t want to be able to get rid of it or cover it up. I just wanted it there as a scar on me.’”

Reactions to the tattoo, Perezcious readers? Do you think Kanye will have something to say about it? Sound OFF in the comments (below)!

Kailyn Lowry: My New Boyfriend is the Love of My Life and We’re Probably...

From Neha-Rohanpreet’s romance to Sonu Nigam’s tribute, all about Smule Mirchi Music Awards 2022