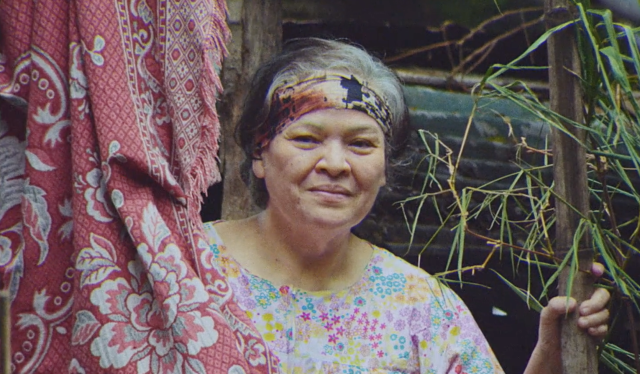 “Do what you love and you’ll never work a day in your life,” we’re told. But how does this adage apply to the final quarter of our lives, when we are no longer working? Do we surrender what we love as easily as we clock out of a workday at 5 PM? Can a person truly retire from their job, when that job is also their lifeblood? This is the dilemma that the titular character faces in Martika Ramirez Escobar’s “Leonor Will Never Die.”

Written and directed by Escobar, the surrealist and avant-garde comedy follows Leonor Reyes (Sheila Francisco), a once-eminent figure in the Filipino action film industry who is, to her dismay, retired. Now in her sunset years, Leonor is not only grieving the loss of her livelihood but also her late son, Ronwaldo (Anthony Falcon), whose frequent sojourns in the mortal realm help blur the boundaries between reality and fiction, the living and the dead in the film. Ronwaldo is also the namesake and inspiration for the protagonist in Leonor’s abandoned action screenplay, “The Return of the Kwago.”

Leonor’s relationship with her living son, Rudie (Bong Cabrera), is no better. The two are seen bickering after Leonor fails to pay the utility bill for the third month, squandering the family’s already dwindling funds on action DVDs. Rudie accuses his mother for trying to relive her bygone glory days. “I don’t understand Mama anymore,” he confides to a friend. “She knows every new show but can’t remember to pay the electricity.” While the elderly woman may be a spendthrift, her reckless purchases also evince an auteur’s desperate hunger to return to her art. The DVDs give her more than just idle escapism: Leonor has a story to tell and she’s eager to finish it.

She picks up where she left off with “Kwago,” excavating the incomplete script from its coffin, a dusty box of forgotten mementos. After a satisfying writing session, however, Leonor is suddenly struck on her head by a falling TV set and is rendered comatose. Leonor is then transported inside her own screenplay. Inside “Kwago,” she is at once a player, spectator, and scribe in her own movie. Leonor experiences every writer’s dream: touching, feeling, and living in a universe of her own invention.

Meanwhile, in the waking realm, Rudie is told by the doctor that Leonor is in hypnagogia and is advised to talk to his mother to help her wake up. He gets the idea to produce Leonor’s screenplay with the wish that she would return to consciousness. The more he reads the script, however, the less he understands his own mother. “Where did it all come from, Ma?” Rudie asks Leonor by her bedside. “I can’t see through you, Ma. You’d rather talk to the script characters.”

True enough, every important person in Leonor’s life has a corresponding avatar in “Kwago,” which has effectively become a space for the screenwriter to process and confront the traumas that have marked her life. We see Leonor commiserating with a bereaved mother – her fictional counterpart – who has also lost a son, apologizing to the character for writing such suffering into her arc. “I didn’t know what to do,” Leonor tells the woman, recalling how Ronwaldo died. “It was like a film.”

Escobar revealed to us that “Leonor Will Never Die” is a manifestation of the idea that “we’re all living in our own movies.” We see this sentiment expressed in the film’s experimental and self-reflexive storytelling, where the fourth wall is frequently broken: the audience becomes privy to the post-production process and Escobar’s own creative decisions as we see her run ideas by her colleagues. As the director emphasized, “Leonor Will Never Die” is “about how I see life as one long film that we keep on writing and revising until it’s complete.” Audiences are left wondering which elements of the film are part of the story and which are paratextual – do these distinctions even matter so long as we enjoy the movie?

“Leonor” is a multi-meaning entity: Leonor the comatose mother, Leonor the tenacious artist, Leonor the character brilliantly portrayed by Francisco. Is the Leonor that we see on the screen in “Kwago” a figment of the retired screenwriter’s own imagination? Or is it the materialization of her memory, preserved by Leonor’s surviving family members? “Leonor Will Never Die” reminds us of fiction’s unique ability to transcend the restrictive laws of reality. Even if the falling TV does prove deadly, Leonor will never really die. As long as there’s a viewer on the other side of the screen, she doesn’t have to.

Donald Trump: I Don’t Know the Neo-Nazi Kanye West Brought to Dinner with Me!