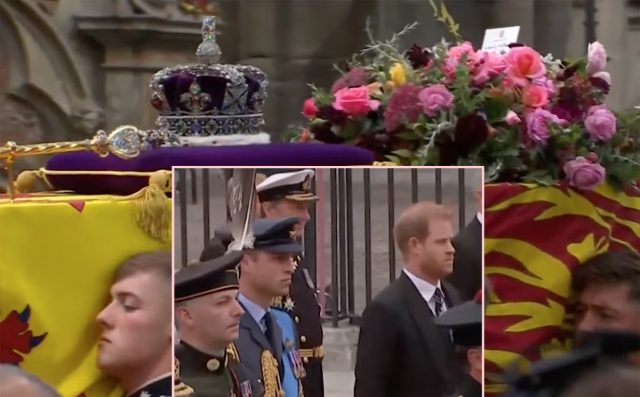 Prince Harry is over all the attention!

On Monday, the 38-year-old once again joined Prince William behind their grandmother Queen Elizabeth II‘s coffin as it traveled from Westminster Hall to Westminster Abbey for the state funeral. Despite reported tensions between the two brothers over the years, they’re clearly putting on a united front in front of cameras… and apparently even behind the scenes.

According to The Times of London, Harry spoke to one pal about all the media attention surrounding his feud with William, as they grieve the Queen’s death on September 8. The friend remembered Harry sharing:

“People need to just stop talking about all this stuff and focus on my grandmother.”

Unfortunately for the Duke of Sussex, the entire world is watching the entire royal family!

And William is feeling it, too, with one source describing to the outlet how he’s “solely focused on doing what is right to honor the Queen.” Still, the feuding pair are “trying their best” to get on with each other. For the Prince of Wales, it’s all about “processing his grief and the death of his grandmother, rather than sitting there processing his relationship with Harry.”

It’s impossible to ignore the headlines surrounding King Charles III‘s two sons, and as we touched on just earlier, that extra awareness “weighs on [William] a lot.” The same insider continued:

With all eyes on them, the siblings seemingly did their best to focus on the Queen while walking side-by-side with their dad behind her casket today. William wore his military uniform, while Harry displayed his medals on the jacket of his morning suit. Inside Westminster Abbey, Meghan Markle, Kate Middleton, 9-year-old Prince George, and 7-year-old Princess Charlotte were waiting.

During such a difficult time, it’s important they can put differences aside to focus on family.

Michelle Branch Arrested for Slapping Husband After Accusing Him of Cheating