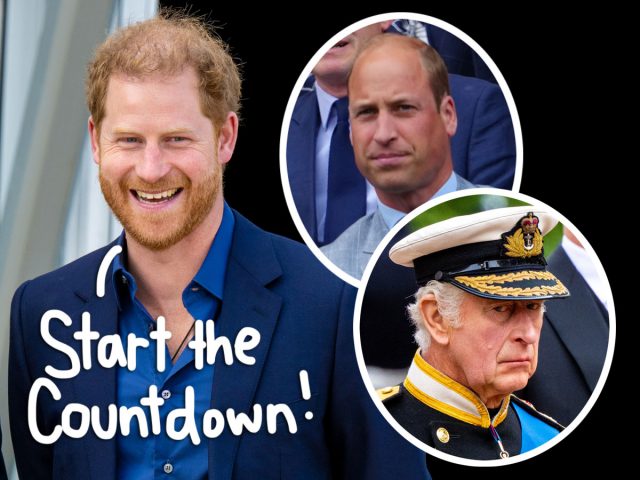 The time has finally come! Prince Harry’s highly-anticipated memoir is officially about to hit shelves!

After weeks of speculation about the release date, Penguin Random House revealed late this week that the Duke of Sussex’s book will hit shelves… January 10, 2023! Just in time to stir up LOTS of drama for the new year! LOLz! That’s not all, either. The publication house also revealed the title and gave fans a glimpse at the book cover — and it’s super shady!

The page-turner is titled SPARE. This seems to be a reference to the phrase the “heir and spare,” which has been linked to Harry and his brother Prince William, who, of course, is the heir to the throne after their father, King Charles III. Oof. Bet William’s not thrilled with the title! The cover is fairly simple with white lettering and a close-up shot of Harry staring straight into the camera. Take a look:

Wow. There’s no turning back now! Describing the contents of the memoir, the publisher said in a press release:

“It was one of the most searing images of the twentieth century: two young boys, two princes, walking behind their mother’s coffin as the world watched in sorrow — and horror. As Diana, Princess of Wales, was laid to rest, billions wondered what the princes must be thinking and feeling — and how their lives would play out from that point on.

For Harry, this is that story at last. With its raw, unflinching honesty, Spare is a landmark publication full of insight, revelation, self-examination, and hard-won wisdom about the eternal power of love over grief.”

Sounds like it is going to cover a lot of ground. He also plans to “support British charities with donations from his proceeds,” specifically Sentebale and WellChild. Very nice!

As we’ve been following, the page-turner was supposed to be released in November, but was pushed back following Queen Elizabeth II’s September death. According to royal biographer Tom Bower via Page Six, Harry has added a chapter discussing the late monarch’s funeral. For months now, the contents of the unreleased project have been making the rest of the royal family “hugely nervous,” and they’ve even considered it a “ticking time bomb.”

Most recently, word on the street is that the King is waiting to read the book before inviting Harry and his wife Meghan Markle to his coronation in May. If the Archewell founder takes any jabs at Queen Camilla — which he reportedly plans to do — then he likely won’t get to be at the ceremony. So, naturally, we’re all dying to find out what he says! Though not everyone is eager to read the new book… Take a look at what some of social media has to say (below):

“That title isn’t bitter at all. Oh and so much for his « privacy « Book tour next?”

“I thought the book in his words was to be written as the man he has become, not the Prince he grew up as”

“Such a bad title.. he is clearly still living in the past! So embarrassing”

There are some people who are excited to see what the prince has to say, adding:

“I will read it because I’m tired of people trying to tell us what we should think of both Meghan and Harry.”

“Fantastic title, I’ve wondered why royalists would confidently call a human being a spare. I am glad he chose that title, can’t wait to read it.”

Yowza. A big range of reactions! What about you, Perezcious readers? Send us your hot takes about the book’s title (below)!

Sonakshi Sinha: "My ambition in life was to grow up and be MARRIED" #shorts