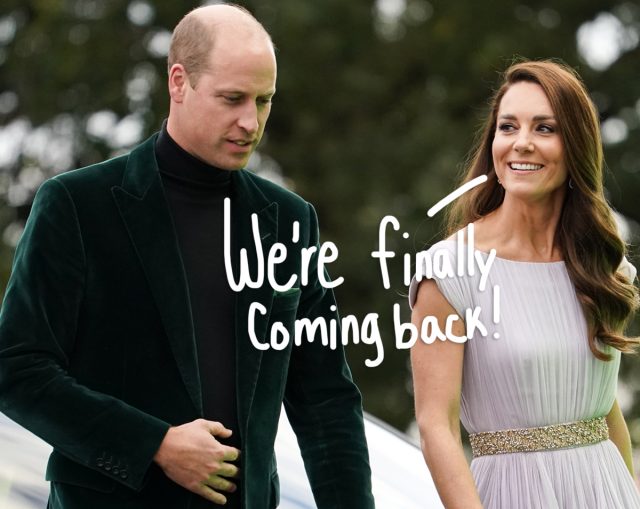 Prince William and Princess Catherine AKA Kate Middleton are gearing up to take on the US in a few months – and already have a jam-packed schedule!

According to an insider for Us Weekly on Wednesday, the royal couple is “excited” to be making the trip to the states in early December, which will be their first time in America in eight years! However, Prince William and Princess Catherine’s trip will be more “work focused” compared to their 2014 visit to New York and Washington, where they were “visiting museums, attending an NBA basketball game, meeting up with Beyoncé and more.” In fact, it sounds like they will be on a mission the second they land in the states!

Related: Prince William & King Charles Have ‘Strengthened Their Bond’ Unlike Ever Before

The sources told to the outlet that the Prince and Princess of Wales are primarily “hoping to boost their royal profile across the pond” with their appearance in Boston for the Earthshot Prize Innovation Summit, explaining:

“Kate and William are not taking this trip lightly and have been brainstorming with their team about the most effective ways to make a positive impact in the U.S. They’re taking a hands-on approach with speeches and engagements.”

Hmm… Trying to win over some more popularity with the American public amid their feud Meghan Markle and Prince Harry?

In case you didn’t know, the annual event awards five winners £1 million for their efforts in helping to create solutions for the world’s environmental challenges. The 40-year-old royal was originally supposed to travel to the summit in New York City last month, but he had to cancel in the wake of Queen Elizabeth II’s death. During this upcoming trip, William and Catherine also plan to “pay homage” to the late monarch at some point since she was known as a “keen environmentalist” throughout her reign.

Even though William and Catherine plan to spend the majority of their time focusing on their professional obligation, that does not mean they won’t pencil in some time for fun too! The Us insider noted the pair are still “looking forward to squeezing in some personal time and reliving a similar experience.” Although Catherine and William are in Boston “for a few days” around the summit, they are going on a “quick trip to New York, where they can enjoy the festivities in the build-up to Christmas.” Specifically, the source shared that the Princess of Wales is “dying to go ice-skating at the Rockefeller [Center] and shopping for fun souvenirs for George, Charlotte and Louis.”

It sounds like they’ll have a great time and busy schedule while across the pond! While Will and Kate are in the states, they seemingly won’t be carving in some time for a visit to see Meghan and Harry into their plans. Things still have been rough between the couples — and no doubt will only get worse once the Duke and Duchess of Sussex drop their Netflix docuseries soon — so it does not come as a shock that the two are not taking a moment to visit their family members!

Reactions, Perezcious readers? Are you excited to see the Prince and Princess of Wales in America soon? Let us know in the comments below.