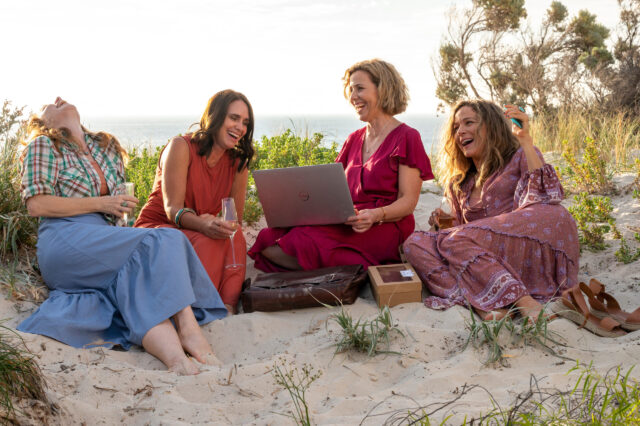 Renée Webster is an Australian writer-director. Her two short films, “Scoff” and “Edgar and Elizabeth” garnered multiple awards and screened at numerous international film festivals. As a director of commercials, her work continues to receive international recognition. Her recent directing work includes drama series “The Heights” and “Aftertaste.” “How to Please a Woman” marks her first feature.

“How to Please a Woman” is now in select theaters. It will be available on VOD July 29.

RW: “How to Please a Woman” is a naughty, tender, sometimes mad and joyful film that takes a very human look at sex and pleasure. And it has the world’s most unlikely protagonist at its center. Gina is a sexually invisible 50-year old woman, lonely in her marriage and undervalued at work. When she starts a new business, and her all male housecleaning service gets out of control, she must learn how to embrace her sexuality if she is to make a new life for herself.

RW: I’m interested in the stories we don’t often hear about – and finding what is relatable and human. What happens when a man’s testosterone levels drop with age? And then, what’s it like to be the woman who is married to that man? I really wanted to bring a swimming community and the visceral experience of swimming in the Indian Ocean at dawn onto the screen. This story is really an amalgamation of so many things. I think what also attracted me to this story was the danger. This is a hard film to get right. The humor and the tone have to be pinpoint specific – and there is a kind of tension in getting that right. I’m drawn to things that are relatable and human and finding these qualities in unexpected places.

RW: This film views sex as a conversation that happens between people and acknowledges that those conversations can change with time. I’d love this film to open up new conversations in people’s lives. From everything we are hearing that is exactly what is going on. What I didn’t expect was to receive so many unsolicited pics of my friends’ husbands and partners doing the vacuuming. Seriously.

RW: The biggest challenge in making this film was getting the tone right. But in my preparation one of the hardest, but most critical, things I did was to reach out to the company who inspired the film. Here in Australia prostitution is legal — albeit with many restrictions. I read about two women who ran a company who offered sexual services for women. These women described themselves as housewives and they were so counter to my admittedly narrow understanding of the sex industry. I had all sorts of preconceived stereotypes in mind. What was really interesting, when I spoke to these women, was finding out about who their clients were. Who are these women who will pay for sex? The answers were also unexpected and some of them have inspired characters and stories in the film.

RW: This film was initially supported by a scheme in Australia called Gender Matters that gave us some development support. It’s quite high-profile development support so we got noticed from there. Our financing was a mix of sales agents, international distribution, state and federal financing, and we simply would not be here without our private investors. It is quite a traditional financing structure for Australian films.

RW: I always knew I wanted to be a writer, but at university I was studying environmental science and law. I had to pick up a film subject to be allowed to do a creative writing unit. The absolute humanity in the work of creating a film — compared to studying case law in the library — was so visceral that I was hooked immediately. Some people ask if I see myself as a writer first or a director first. I started as a writer because I was more confident in that. I had grown up writing stories as a little girl. Also, who was going to give me anything to direct? Directing felt harder – it’s very public, you need to be resourced to have that whole team working with you, etc. Now I probably feel a little more like a director than a writer in recent years. In all reality, I think of myself, first of all, as a storyteller.

RW: Sometimes the best advice can also be the worst advice, [such as] “wait for your moment.” Well, you shouldn’t wait – we know that, but at the same time, the stories you choose to either create or be connected to are important. I think you do have to bring your politics to your work, and as much as opportunity is important, being selective about where and how you want to use your creative energies is also important.

RW: I think one of the most valuable things you bring to your “directing voice” are your instincts. And sometimes that comes down to something really simple like what you do and don’t like. It’s OK just to go with what you think is right, or what you like the idea of. It can be hard to follow through with that, but it’s important to recognize and follow your instincts.

RW: I’d like to mention one of my favorite female directors, who is Jessica Hobbs. Jessica brings a really cinematic emotional experience to television and was outstanding in this field before television became what it is today.

Also, I love Kathryn Bigelow’s films. All of them. I love how completely compelling they are, how well she works with character within genre, her success at the box office.

RW: COVID was a very busy time for me. In Australia we’ve been luckier and in our more extreme lockdown stages, I was finishing writing and packaging this film. Of course, I hate wearing a mask when I’m trying to talk to the cast – but we’re all in the same boat. We have been able to shoot through COVID and manage post as well.

RW: We need the pendulum to swing in favor of diversity for some time to allow the balance to come back. I think it’s really important to find the right balance between authenticity and inclusiveness. What I mean by that is: not just having shows that are “black shows” or “diverse shows,” but allowing all these elements to come into play in all of our programming. At a script level, that means finding ways to fill writers’ rooms with the right diversity mix. The challenge in Australia can sometimes mean finding available writers but that’s when we start creating more opportunities by fostering new talent.

Sister Wives in Denial: What is Christine Thinking?!? Maybe She’ll Stick Around!