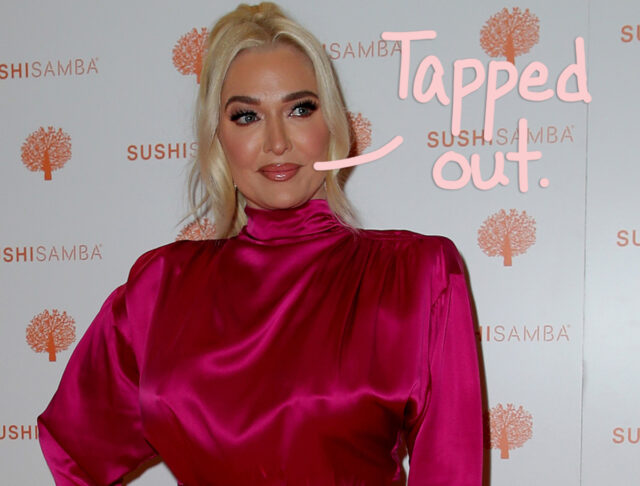 Erika Jayne is going through it.

The 50-year-old reality TV star is apparently having major trouble paying a seven-figure tax bill in the state of California — so goes the claim being made by the polarizing Real Housewives of Beverly Hills star herself in a new court filing! And the amount of money she owes is NOT a small sum, either!

In a doc filed with a California court earlier this week, the Bravo-lebrity outlines that she owes exactly $2,226,985.77 in taxes to the Golden State’s California Franchise Tax Board. (!!!!!)

Writing about how paying the amount is apparently prohibitive for her at this point in time, Jayne claims in the doc (below):

“I am in the midst of trying to figure out the basis of this tax bill with the assistance of my business manager, who is also an accountant. I do not have the ability to pay the [California Franchise Tax Board] tax bill.”

And according to newly-obtained court docs, these tax troubles have apparently been festering for a decade. Us Weekly unearthed new filings this week alleging that Erika’s tax issues aren’t recent, but supposedly centered on the years 2011, 2012, and 2013.

In fact, the Pretty Mess author appears to be somewhat uncertain herself about what the seven-figure bill actually covers! The mag reports Jayne is not sure if the California Franchise Tax Board is “claiming any sort of lien” on any of her assets. TBH, it’d be interesting to know whether that possible lien covers any of her pricey possessions, some of which Jayne has previously been accused in court of supposedly shrouding in order to keep out of reach of investigators in her various legal battles.

Obviously, tax issues like these take a while to come into view. Heck, if the California tax folks are just now asking for money backdated from the 2011 fiscal year, it might take a little while longer to fully sort things out from here. Still, Erika has been dealing with a lot of s**t recently — and to be perfectly honest, it sounds like some of the issues are of her own doing.

For one, the Georgia-born reality TV star was taken to task for recent comments she made about the mental and physical health of her estranged husband, Tom Girardi, and comparing her situation negatively to that of Bravo legend Bethenny Frankel with the sad death of love Dennis Shields. Other RHOBH cast members have tried to push Erika to get her public life in order, but shocking new accusations levied at Erika supposedly being the “front woman” of a “criminal enterprise” have not exactly helped that cause.

This tax bill news comes at an awkward TV time for Erika, too. In Wednesday night’s new episode of RHOBH on Bravo, the reality TV veteran uses her full-scale glam squad (costing $40k per month!) to do her hair and makeup on a cast trip to Mexico.

Explaining her reasoning for not downsizing the glam squad amid financial and legal controversies, the star says on camera:

“You can downsize and we’ve downsized, right? Certain things you don’t downsize on and that’s your glam. … Fashion, hair, makeup — to me, it’s art. Living art, and I enjoy that. And it shouldn’t be judged any other way. Nobody judges if people wanna have big families. I wanna buy a bunch of clothes.”

OK. We understand that view to an extent. You can definitely make the “living art” argument in certain cases, and y’all know how much we love fashion!!

But girl, a full glam squad? In this economy?? While you owe money to the government?! And it’s a LOT of money, too?!?!