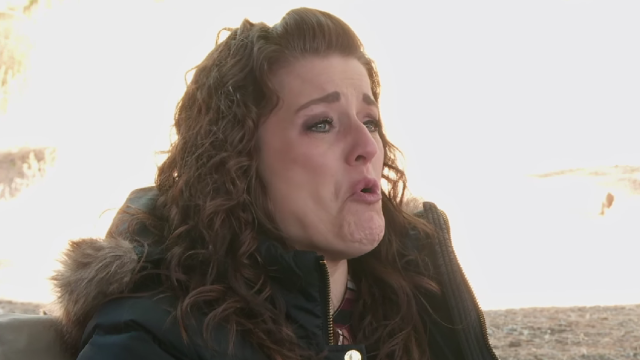 If you’ve been watching the current season of Sister Wives, then you know that Kody has been kind of a jackass.

The issue, of course, is that Christine made the decision to leave him, and that left him feeling sad, but he’s too narcissistic to be able to process that, so he acts out instead.

It’s been pretty tough to watch him flounder, completely unable to work through his feelings and just fall back on being awful instead.

In a memorable scene from earlier this season, Kody demanded that his remaining wives “conform to patriarchy,” and he said that he feared his decision to let the wives be independent destroyed their family.

What a gem, right?

Kody could never be accused of being a feminist, but this is a lot, even for him.

And according to a sneak peek from this week’s episode of Sister Wives, Robyn thinks Kody’s opinion of women in general are, well, not great.

The clip begins with Robyn, Kody, Janelle, and Meri having what appears to be a very serious conversation about the state of their relationships now that Christine is gone.

“It’s hard to be a plural wife when your husband has a wife leaving him,” Robyn says, barely able to get the words out through her tears.

“And most men in monogamy,” she continues, “they just go do stupid stuff, they date whoever and they’re angry and they’re pissed and women suck.”

“He’s dealing with that while he’s married.”

“He’s shooting us all down because Christine is a woman and he’s angry and he’s hurt.”

You’d hope that in a situation like this the husband would be able to deal with his feelings about one wife without it affecting his opinion on literally all women, but this is Kody we’re talking about.

So that might be too much to hope for.

“Plural marriage isn’t all beer and skittles,” he goes on. “It’s not for a man.”

Thankfully he acknowledges that women and men in plural marriage do both have their own kinds of struggles, and he even says that he doesn’t want to “mansplain” the matter.

“It’s just obvious that it’s difficult,” he says. “‘You’re going to share your husband, why would you do that?’”

Back in the big conversation with everyone, Robyn tells the group that she just wants to get everything figured out in their relationships.

At that moment, Janelle, who has clearly been over Kody’s nonsense for some time, gets up to leave, saying that she has to go pick up her daughter.

It seems like they’d been planning on showing each other some plans for the homes they eventually want to build on Coyote Pass, so the conversation switches to that so Janelle can show hers before she leaves.

In his confessional, Kody has a rare moment of clarity in which he realizes that “We’re going down a road where we really were on the verge of a critical conversation.”

“And now we’re looking at plans and getting all happy and everything like that. I think it was a mistake, I think we should have finished the crucial conversation.”

It’s so wild to watch clips like this because it’s so astoundingly clear to viewers that the family is right on the verge of imploding.

After watching this, the rumors that Janelle has left are even more believable, as if that was even possible, and Christine choice to get out of there seems even smarter.

If Kody is treating his wives badly just because they’re women and a woman hurt him, and if he’s indirectly complaining about feeling unloved even though he has multiple wives …

What are they all even doing? Why live like that?

Can this situation get even more uncomfortable to watch? Will Kody somehow manage to become more unlikable than he already is?

Guess we’ll have to tune in to find out!

Who Is Pat Stay? Five Things On Canadian Rapper Dead At 36 – Hollywood...