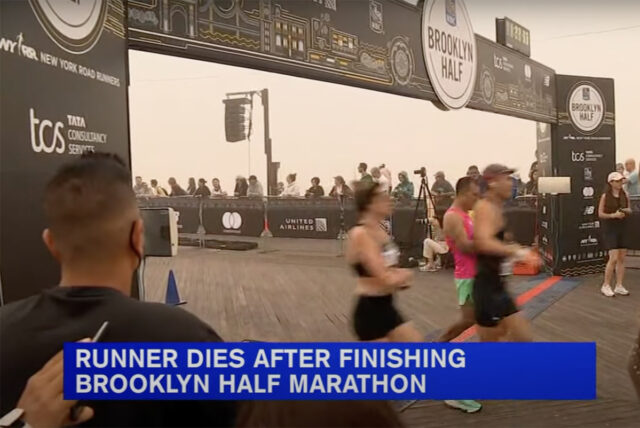 A runner collapsed and died at the finish line of the Brooklyn Half Marathon on Saturday morning, according to media reports.

At least 15 participants in the popular half marathon race were transported to local hospitals, including five of whom were considered to be in “serious condition,” according to a confirmation from the New York City Fire Department released to People on Saturday afternoon.

Tragically, one person — identified as a man in his 30s — was pronounced dead at Coney Island Hospital later in the day, according to race organizers. People identified the runner as a 30-year-old man; later on Saturday, CNN reported that the deceased participant was a 32-year-old man. No definitive cause of death has thus far been determined for the late runner.

Related: Toddler Dead After Father Accidentally Ran Him Over With Car In Driveway

The race was organized by New York Road Runners, which is “a nonprofit dedicated to raising money for charity with its races,” according to People. The Brooklyn Half Marathon treks more than 13 miles through the borough, from Prospect Park to Coney Island.

Trina Singian, a spokesperson for the NYRR organization, released a statement to the media about the tragedy, saying (below):

“We are deeply saddened by the passing of a participant following the 2022 RBC Brooklyn Half. Our thoughts and sympathies are with the runner’s family and those close to them. The health and safety of our runners, volunteers, partners, and staff remain the top priority for NYRR. In coordination and consultation with the city agency partners and weather experts, NYRR was closely monitoring weather conditions leading up to and during the race.”

According to media reports on the non-profit org overseeing the race, the deceased runner was “immediately attended to by on-site medical staff” after collapsing at the finish. The incident apparently occurred shortly before 9 a.m. local time in New York City, according to CNN. That outlet reports that the runner collapsed and was found lying unconscious on the pavement upon finishing the race.

During the race, temperatures in New York City hovered around the 60s and 70s, rising higher as the day moved forward. By the afternoon, temperatures were elevated for this time of year, with highs reaching up to 90 degrees later in the day in the hours after the runner died. Air pollution alerts listed the borough as having “moderate” air quality throughout the day. According to the National Weather Service, the relative humidity in the area during the race time was around 96%.

Here is more on the awful tragedy, from Eyewitness News ABC7NY (below):

We send our condolences to that runner’s friends, family, and loved ones during this terrible time.

Khloé Got What She Wanted! Kim Kardashian Announces ‘Vagina Area’ Of SKIMS Bodysuits Will...

Tammy Slaton Curses Off Critic: I’ll Do What the F–k I Want!