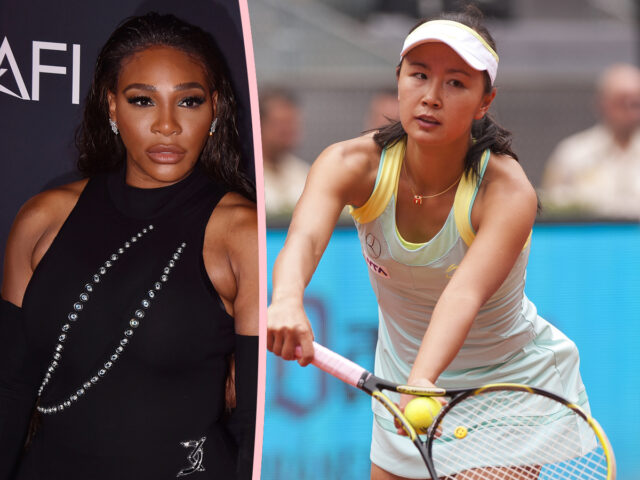 This is an incredibly concerning story.

The international tennis community, including superstar Serena Williams, has joined together in demanding the whereabouts of Peng Shuai, a doubles champion who won at Wimbledon in 2013 and the French Open in 2014. Peng has not been seen publicly since November 2, when she accused the Communist Party’s former Vice Premier Zhang Gaoli of sexual assault on China’s social media site, Weibo.

The post described the 35-year-old’s on-and-off ten year affair with the married, 75-year-old official, which she says included a non consensual encounter. Per CNN, excerpts from the open letter included:

“Why did you have to come back to me, took me to your home to force me to have sex with you? Yes, I did not have any evidence, and it was simply impossible to have evidence.”

“That afternoon, I was very afraid. I didn’t expect it to be like this. I didn’t agree to have sex with you and kept crying that afternoon.”

“I couldn’t describe how disgusted I was, and how many times I asked myself am I still a human? I feel like a walking corpse.”

The post was deleted soon after, and Weibo users were unable to look up Peng’s name or a list of other related search terms, including “tennis.” The athlete hasn’t been seen since, but an email attributed to her was sent to the Women’s Tennis Association Chairman and CEO Steve Simon, walking back the allegations and saying “everything is fine.”

In a statement, Simon expressed his doubts about the email, saying:

“The statement released today by Chinese state media concerning Peng Shuai only raises my concerns as to her safety and whereabouts. I have a hard time believing that Peng Shuai actually wrote the email we received or believes what is being attributed to her. Peng Shuai must be allowed to speak freely, without coercion or intimidation from any source. Her allegation of sexual assault must be respected, investigated with full transparency and without censorship.”

Meanwhile, other tennis players have been taking up her cause, using the hashtag #WhereIsPengShuai on Twitter. Serena wrote:

“I am devastated and shocked to hear about the news of my peer, Peng Shuai. I hope she is safe and found as soon as possible. This must be investigated and we must not stay silent. Sending love to her and her family during this incredibly difficult time.”

I am devastated and shocked to hear about the news of my peer, Peng Shuai. I hope she is safe and found as soon as possible. This must be investigated and we must not stay silent. Sending love to her and her family during this incredibly difficult time. #whereispengshuai pic.twitter.com/GZG3zLTSC6

Related: Naomi Osaka Fined $15K, Threatened With DQ For Not Speaking To Media At French Open

She was joined by other stars of the sport like Naomi Osaka, Billie Jean King, and Chris Evert in expressing their concern.

Yes, these accusations are very disturbing. I’ve known Peng since she was 14; we should all be concerned; this is serious; where is she? Is she safe? Any information would be appreciated.???? https://t.co/RH0aYCDqQm

This is such a disturbing story. We are glad to see the tennis community coming together, and can only hope that Peng is found safe very soon.

Alex Morgan Is ‘Proud’ Of Her Bronze Medal She Won At Tokyo Olympics –...

Qiong Wang’s “All About My Sisters” Acquired by Icarus Films