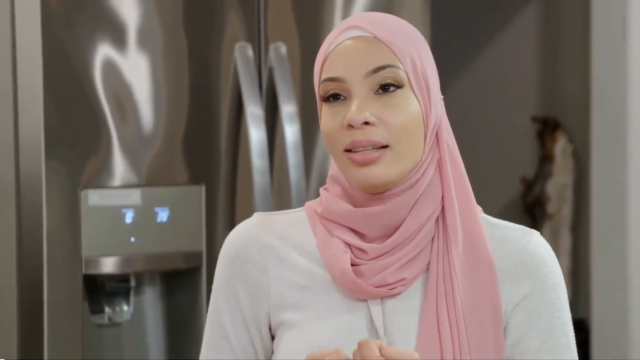 Since the beginning of Season 9, Bilal Hazziez and Shaeeda Sween have been delaying important conversations.

There have been important distractions along the way — like Bilal’s twisted “fake house” test.

But we’re nearing the end of the season, and Shaeeda is very familiar with Bilal’s colorless home.

Bilal has asked her to sign an alarmingly one-sided prenup. Shaeeda has balked, but will now agree … on one condition.

90 Day Fiance viewers have not gotten a direct look at the actual prenup.

But according to Shaeeda, it would leave her with nothing — whether she divorces Bilal in a year or in 25 years.

Her only option would be her own work, precluding stay-at-home motherhood.

That is unlike any legitimate prenup that many of us have ever heard of.

Shaeeda’s attorney seemed to agree, telling her that he would not recommend that she sign it.

However, in this sneak peek ahead of Sunday’s episode, Shaeeda and Bilal seem to be nearing a compromise.

As you can see in the video below, Shaeeda approaches Bilal to explain how this can work.

“I just want something that belongs to me,” she tells him.

“And that was all I was basically trying to say,” Shaeeda reasons.

Bilal, for his part, nods his head and tells her: “I understand.”

But Shaeeda is not done, setting a boundary: “I want something else. I would like to have a child before 40.”

It sounds like he’s predicting years of infertility instead of, you know, saying what he means.

All season long, he has been avoiding telling Shaeeda that he doesn’t want to have more kids. He has dodged the topic at every turn.

“When it comes to that, that is like beyond our control,” Shaeeda acknowledges in the clip.

“But I just want you to have that same, like, eagerness to have a child,” she says.

“Yeah, I mean, I guess so,” Bilal says unconvincingly while staring at the ground. Uh-huh.

Not even Shaeeda can ignore that, even after months of living in this tense psychological thriller.

“We are days away from getting married, Bilal,” she says. “‘Guess so’ is not an answer. It’s either yes or no.”

“And you want to have a child before you turn 40?” Bilal then asks, as if seeking confirmation..

“Yeah, it was just like, we are on the same page when it comes to having children,” Shaeeda replies.

She then adds: “And I would like to see it in writing as well if that’s okay.”

Bilal offers a startling response, one that we never expected to hear: “I can – I can agree to that.”

Bilal tells the confessional camera why he suddenly agreed to her request.

“The fact that Shaeeda is willing to sign this agreement even though she necessarily didn’t want to,” he begins.

“And I’m definitely willing to compromise as well,” he adds.

“So whatever she wants to put in there,” Bilal states, “I’m 100% into putting that in there as well too.”

Bilal does warn: “I don’t think right now at this very moment would be the best decision to have a child.”

“I just have concerns of having children too early because with her coming to the country,” he claims.

“And so much other different things,” Bilal continues, “I feel like it could be too much on us.”

“But I’m willing to do whatever it takes to not lose her,” Bilal announces.

“Oh, we’re like business. This is business,” he jokes as the two shake hands over the deal.

The Bachelor Plummets to Record-Low Ratings; Will This Be the Final Season?