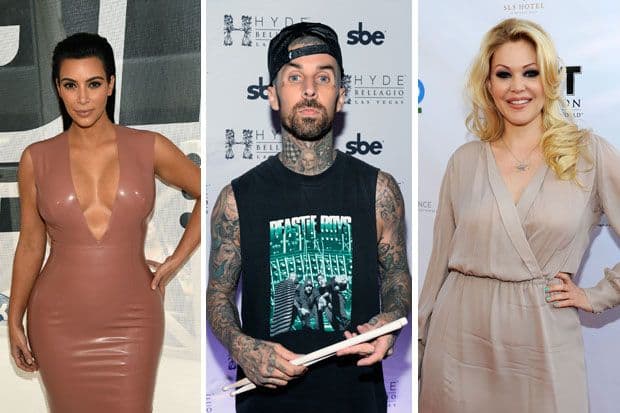 As you’re probably aware by now, the relationship between Travis Barker and Kourtney Kardashian has become quite serious.


In fact, it’s been widely rumored that Kourtney and Travis are planning a wedding and may be hoping to tie the knot as soon as this summer.


But while most folks seem to be rooting for Kourtney and Travis, the couple is experiencing a bit of pushback from their exes.


Put more precisely, it seems that Travis’ ex-wife is actively working to bring his current relationship to an end.


Travis was married to Shanna Moakler for four years, and while the couple seemed to have an amicable co-parenting relationship during the 13 years since their split, these days, Shanna is openly critical of her ex.


At first, she complained about Kourtney and Travis’ constant social Media PDAs, and fans were sympathetic.


After all, it’s not hard to imagine why Shanna or Scott Disick might not be fans of Kourt and Travis’ coupled-up pics.


But now, Shanna has escalated her attacks with a scandalous claim about her marriage to Travis — and his relationship with the Kardashian family.


The latest drama began when Shanna and Travis’ 15-year-old daughter Alabama shared a screen shot of a message that her mother sent to an unidentified Instagram user.


Shanna began by addressing rumors of trouble in her relationship with boyfriend Matthew Rondeau.


“Matthew has been my rock he truly has changed and has been amazing.. When we went life trip other night we were joking but lots of inside jokes I don’t think translated,” Moakler wrote.


“I left Travis because he was emotionally abusive, I left the money snd mansions for a reason… family is all that matters but I can’t compete with kids whose father doesn’t encourage relationships with their own mother and purposely tries to alienate them away,” she continued.


From there, the former model leveled a pair of shocking allegations against Travis:


“Travis controls Bamas social media… however I get blamed for her sexualition! How does a father allow her to act like that and do lives at 4am? With Men twice her age..” Shanna wrote.


“I’ve been legally bullied out… I’m fed up and I’m Exhausted.. Social media and the media isn’t real,” she continued.


“I divorced Travis because I caught him having an affair with Kim! Now he’s in love with her sister.. It’s all gross… I’m not the bad guy!”


For obvious reasons, the claim that Travis had an affair with Kim has made tabloid headlines all over the world.


But Team Travis was quick to get in front of the rumors:


“Anyone who is close to them has always known that Travis has been in love with Kourtney for forever [not Kim],” an insider told Page Six.


“They are madly in love and best of friends. Everyone in their circle couldn’t be happier for them,” the source continued.


“There is nothing weird or any drama here.”


Obviously, the insider remained unidentified, but given the decisive tone and obvious desire to put a stop to these reports, it’s safe to assume that it was a representative of Barker’s doing the talking.


As for the situation between Shanna and Alabama … well, that remains complicated.


“Matthew is nothing but awful to her. Not only that, but he cheats on her. My mom has never completely been in my life,” the 15-year-old continued.


“Can you guys stop painting her out to be an amazing mom? Did your moms ask to see you on Mother’s Day [because] mine didn’t? I’m done keeping it a secret, reality shows.”


Shanna responded to her daughter’s allegations when an Instagram commenter asked her if there’s any accuracy to them.


When a different commenter asked why Shanna’s kids seem to spend so much more time with their dad, Shanna offered a reply that downplays the current drama:


“Because he lives behind two gates, has a mega mansion and is cooler than me,” she wrote


“LOL, we have shared custody but our kids are older. We are very close.”


Needless to say, Shanna and her daughter are offering two very different accounts of the situation.


Thus far, Travis and Kourtney have remained silent, likely in the hope that this situation will simply blow over.


But we get the feeling that Shanna’s claims regarding Kim won’t disappear as quickly as Travis and Kourt would like.

Amy Roloff Spinoff: Could It Happen? Would You Watch?