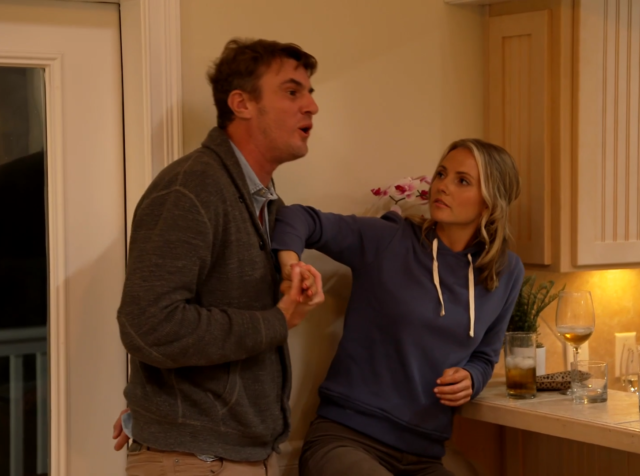 The Southern Charm couple’s breakup is not exactly a mystery.

Shep had admitted to cheating. It also sounds like there was a lot more to which he didn’t admit.

But … why is Shep suddenly flirting with her again? In public, no less.

Southern Charm viewers first got to know Taylor Ann Green on Season 7 of the show.

During that season, Shep confessed to having cheated on her.

Given that the show’s premise is basically “watch these rich Charleston f–kboys refuse to behave,” it was not a shock.

Then, on Season 8, Shep and Taylor had a different adventure.

As we all watched, the couple experienced a pregnancy scare.

More than just the scare itself was the conflict that ensued when Shep and Taylor did not see eye-to-eye.

“But,” he then admitted, “we don’t use protection.”

Shep, a grown 42-year-old adult man, then confessed: “I don’t know what I want.”

Shep expressed to Austen that he was “happy” with their relationship, which had lasted nearly two years.

But Taylor felt very differently about the pregnancy scare. For her, it really brought things into focus.

“You didn’t even ask how I felt,” Taylor confronted him.

Taylor added: “Like, you haven’t ever really said, ‘If you things were to ever happen, you can trust in me.’”

Trust in him to what? Well, to take care of her and a potential baby, if it came to that.

In fact, Taylor expressed that she would want to marry if she did end up getting pregnant.

But Shep told her that he “doesn’t want to get married and settle down.”

Now, the two of them have broken up. Obviously, their different desires had to have been a factor.

But reports suggest that this disagreement was not their only issue.

Instead, Shep’s total disinterest in fidelity or monogamy was a dealbreaker.

“Shep has a real issue with monogamy and refused to commit to Taylor,” an insider reported.

Shep was allegedly “telling her that he doesn’t want to be with just one person and change his lifestyle.”

That sounds fine … if it’s a conversation that people have when they start dating, not two years later.

“She’s incredibly hurt,” the source shared. That much, at least, we all could have assumed.

“But she knows that she deserves a guy who will fight for her,” the insider affirmed, “not one who is so selfish.”

A second source then vowed: “He’ll regret this.” Perhaps he already does?

Listen To This: Big Deal!