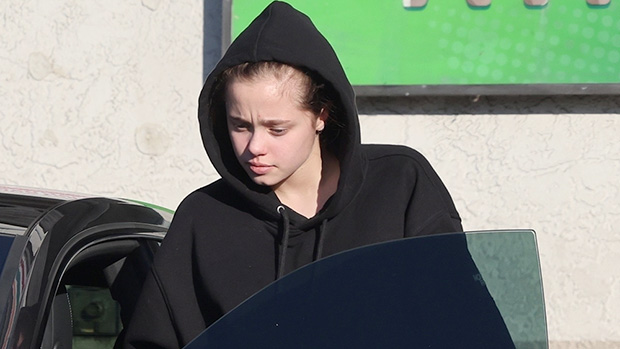 Shiloh Jolie-Pitt, 16, went out on her own to grab some Twizzlers from 7/11 on Monday, November 21. The teen, whose parents are Angelina Jolie and Brad Pitt, was seen driving herself to the convenience store. She kept it super casual as she headed in, sporting an all-black outfit for the day.

Shiloh rocked a hoodie with the hood pulled over her head, as she stepped out of a black car. She also sported a pair of baggy sweatpants and red sneakers. She also wore a black face mask and carried her phone in her hand. She seemed like she was staying very low-key for the afternoon trip.

Shiloh was bundled up for a chilly November day. Over the summer, she spent a lot of time bonding with her mom and dad. She spent a lot of time with the Maleficent actress in Europe during the warmer months. Angelina and Shiloh were seen out and about on a few occasions having some mother-daughter time together, like when they went shopping in Rome or enjoyed a Maneskin concert in the band’s home country. Shiloh is one of Brad and Angelina’s younger children. The exes share five more kids: Maddox, 21, Pax, 18, Zahara, 17, and twins Vivienne and Knox, both 14.

Even though Shiloh is still a teenager, she has been seen venturing out on her own on a few occasions. She was spotted out on a solo shopping trip to Target over the summer. On another occasion, she was seen out hitting some stores, while carrying a birthday balloon in Los Feliz, back in July.

With both of her parents being actors, Shiloh has shown that she also has an interest in entertainment, because she’s a dancer. Videos of her in classes at the famed Millenium Dance Complex studio surfaced over the summer and showed off her skills. Brad raved about his daughter’s dancing abilities in an interview with Entertainment Tonight. “It brings a tear to the eye,” he said. “Very beautiful.”