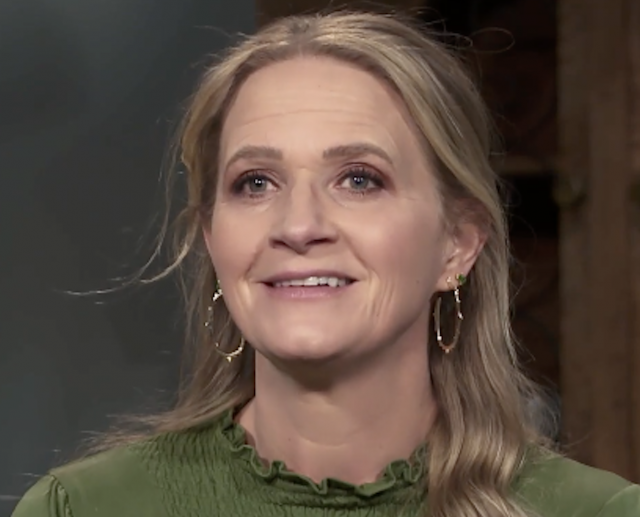 There will be the rare reason for joy on this Sunday’s upcoming episode of Sister Wives.

In a sneak peek shared by Entertainment Tonight, the Browns gather around to celebrate Ysabel’s birthday and graduation.

There’s cake. There’s gluten-free quiche. There’s some beautiful Arizona weather… and there is also a whole bunch of consternation.

What the heck, most of Christine’s polygamous family members wonder, is Christine thinking these days?!?

“This evening has gone off without a hitch. It’s been wonderful, and I think Ysabel has felt special,” Kody says in the ET preview clip.

“I’m just blue. We will never be there again. If we really go through with this is, as Christine is leaving, is she really going to leave?

“I’m living in a delusional world where [I’m] wishing that Christine wouldn’t leave.”

Thus far on Sister Wives Season 17, viewers have watched as Christine tells Kody how unhappy she has been and how she plans to leave Flagstaff for her native state of Utah.

Robyn, whose relationship with Christine played a major role in Christine’s decision to walk away, echoes her spouse’s sentiments in the footage.

“We’re in this moment, we’re having a nice time, how is this wrong? How does this not work for everybody?” she asks on air.

“I don’t know, I’m just one of those people who hopes, constantly, that maybe something will spark for someone and go, ‘Oh, this is worth figuring out, sticking around,’ [because] I would look at it and think that.

“It could make Christine feel like, ‘Hey, this is worth staying for.’”

Meri — who many fans think should walk away from Kody herself — was also left aghast in the wake of this fun party.

“You know, when I look at days like this when we’re all together, and we’re all smiling and setting the crap aside like, why can’t we do that?” she wonders on the October 9 episode.

“Why can’t we work on the things that we need to work on between each other? We’re not doing justice to our family …

“I’m devoted to doing what I need to do. I know that not everybody is.”

Janelle, however, admits that while the gathering went well, she just doesn’t see how they can sustain the feeling — and she knows Christine much better than the other women.

“I personally am not very optimistic that we’ll see very many days like this,” she says candidly.

As for Christine, she thinks Kody is finally realizing he let too much time pass him by without strengthening his bond with Ysabel… the same daughter he snubbed in September 2020 by NOT accompanying her for major back surgery.

“Kody is not one to hide his emotions,” Christine says.

Indeed, Christine previously said that Kody not making time for Ysabel played a significant role in pushing her out the door.

It was during last week’s episode when Christine finally told her fellow sister wives that she’s planning to leave Kody, prompting an epic and disgraceful reaction from the father of 18.

“I’m going to be the head of my household again and so I’m not going to be circumvented in that,” Kody declared.

“And so if everybody’s willing to conform to patriarchy again, I guess, because I’ve been fighting to make everybody happy.

“My bitterness is that out of trying to do that and not having the family that I had thought about and designed.”