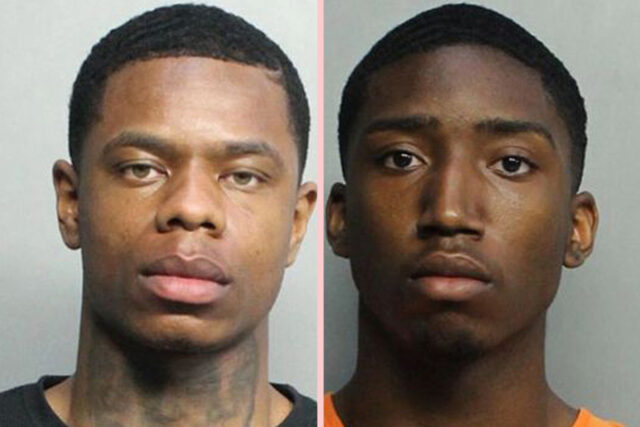 A Pennsylvania woman’s spring break trip ended in tragedy when she died after allegedly being drugged and raped in her Miami hotel room by two men.

According to reports, Evoire Collier, 21 (above, right), and Dorian Taylor, 24 (above, left), are accused of drugging, sexually assaulting, and stealing from Christine Englehardt, who was later found dead in her Miami Beach hotel room. The two are facing charges of burglary with battery, petty theft, sexual battery, and credit card fraud.

At a bond hearing Monday, a detective testified that Englehardt appeared to be in no condition to give any kind of consent, based on the surveillance footage showing the men entering the Albion Hotel with the 24-year-old at about 1 a.m. Thursday morning.

The Miami Beach Police detective claimed that at one point, the victim had to be held up by one of the defendants as they made their way to her room, telling the court:

“She was actually staggering a little bit, and at one point co-defendant Taylor held her, behind her, around her neck, basically keeping her stable. We believe she was either intoxicated or drugged, and she could not give consent for them to actually go with her.”

Thirty minutes after entering the room, Collier and Taylor were allegedly captured on camera leaving the hotel alone. Police claim the North Carolina natives stole the money to spend it on their spring break trip.

The suspects reportedly admitted to giving Englehardt a green pill on the way to her room, but the connection between the drug and her death are unclear. The Miami-Dade Medical Examiner’s Office said on Monday it was awaiting a pending a toxicology report to confirm the victim’s cause of death.

“You’re both being held on some serious charges. You battered a helpless victim.”

She later said of the horrible incident:

“The victim couldn’t even pick up the phone to call the police or 9-1-1 after they did what they did to her.”

According to her family, Englehardt had traveled to Miami alone from Pennsylvania. Her best friend Hailey Davis told WSNV:

“I’m just shocked that the fact that she’s really gone, it’s been really hard. She was a good person. She didn’t deserve anything like that to happen to her.”

Both suspects were denied bond in court, and will remain behind bars. If officials find that Englehardt’s death was connected to the green pill they allegedly gave her, they could face additional charges related to her death.

Our hearts go out to the victim’s loved ones.