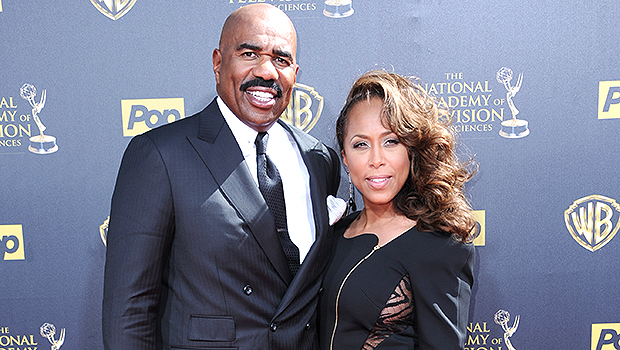 Steve Harvey, 65, wrote an emotional love letter to his wife Marjorie Harvey in honor of their 15th wedding anniversary. “Nearly two decades have flown by, and I have felt lucky every single one of those days,” Steve, 65, began his tribute which was published in Good Housekeeping‘s July/August 2022 issue, published on June 21. “I don’t know if I can describe our connection in words, but I’ll try,” the comedian added.

Steve recalled how he and Marjorie met at one of his stand-up shows in Memphis in 1987, but they grew apart and lost touch. “The first time around didn’t pan out the way we would have wanted it to. I became homeless, I ran out of money and I got into some trouble,” he wrote. “Things went south for me, and I had no way of reaching out to you so I just disappeared.” The Celebrity Family Feud host noted how the pair “reconnected” in 2005, and thanks to Marjorie, Steve “finally had somebody I could start over with.”

“You were willing to get in that foxhole with me and grow with me,” the father of seven said. “When we got back together, it was even better because we knew each other. It was just a perfect fit. It’s hard to explain. It wasn’t work. It wasn’t hard to be together. We laughed all the time. You made me happy. I made you happy. I filled in all your gaps. You sure filled in all my gaps. It didn’t take long for me to realize that you were the chick for me.”

Steve told Marjorie in his tribute that she gave him “peace” and supported him in his successful television and comedy career. He also applauded her mothering skills (Steve adopted Marjorie’s three children, including daughter Lori Harvey, after they got married in June 2007) and said that she understands their kids “in a way I never have, but I look to you as an example.”

“I want to thank you, because without you there is no way my life could be this,” Steve continued. “I owe you a debt of gratitude because you simply changed my life. If people get tired of hearing me say that, that’s OK. It doesn’t change the facts. You are the single biggest reason outside of God’s grace that I am where I am today. You’re the one. I feel like if I lost everything, you’d stay with me and we’d build it up again. As a matter of fact, I know you would. Xo, Steve.”

Big Freedia: 5 Things To Know About The Guest Vocalist On Beyoncé’s ‘Break My Soul’

Before Marjorie, Steve was married to Marcia Harvey and then to Mary Shackelford. He has four biological children from those marriages, and then is a proud stepfather to Marjorie’s three kids. He and Lori, 25, have an especially close father-daughter bond.