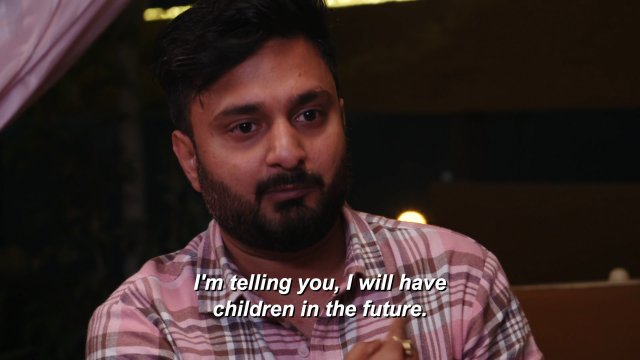 During the latest episode of 90 Day Fiance: Happily Ever After?, Sumit Singh spoke to his family.

This was a big deal. While some relatives were no-shows, this was the first that he’d seen of others since his mother disowned him.

But they didn’t meet with him to make nice. No one has changed their mind about his marriage.

Why is Sumit promising to have kids? Jenny is 63, and they haven’t discussed this at all.

Sumit and Jenny, now fully home from the honeymoon, have a lot of work ahead of them.

As Jenny unpacks their belongings and plans out the work to turn the old house (where they must remain, as it’s the address on her immigration documents) into a home again, Sumit has plans.

He is going to meet up with his family. He invites Jenny, but she would rather pass.

“What a waste of time,” Jenny then confides to the confessional camera. She doesn’t see the point.

Remember, Jenny has been watching Sumit fight for his family’s love and support for years. It is a losing battle, and it’s hard to witness.

“He’s trying to keep me happy, but he’s trying to convince his parents to be happy for him,” Jenny observed. “It’s starting to get old.”

Sumit, unfortunately for him and for Jenny, does not see this as a waste of time.

He chalks up Jenny’s advice of letting his parents go to her being American. Though “forgive your family no matter what” is a pervasive brainrot in the United States, some parts of the world do not see it that way.

To Sumit, family is everything. He truly believes that no one does or will ever love him as much as the people who insulted and disowned him.

Without Jenny, Sumit arrives for the meeting with his family. His brother, Amit, is there. So is Amit’s wife, Shree.

Sumit’s aunt, Surat, is also there. The two hug before he takes a seat.

Anil and Sahna, Sumit’s parents, are not there. Are they running late?

They are not coming at all, in fact. Sumit did not realize this.

It turns out that when Sahna cried and yelled at Sumit, disowning him and saying that he’s no longer her son, she meant it.

If he shows up at her home, she will insult him and kick him out. And no, she’s not showing up to a family get-together. Not with Sumit there.

Unfortunately, Sumit cannot see that he is better off without her in his life.

Meanwhile, he hears them share how Sahna has been melting down because her adult son is married to the woman he loves.

Apparently, her eyes are constantly bloodshot to the point where she looks like she has a drug addiction, but it’s from crying and stress.

Sumit continues to wish that his family could just be happy for him. Jenny isn’t a bad person, after all.

He assures them that he is perfectly happy with Jenny.

This is the life that he wants for himself.

Then, his family brings up that they don’t see him having a real future with his wife.

Why? Because she cannot give him children. Some families feel a twisted sense of entitlement to grandchildren.

Unfortunately, Sumit is not even the only cast member this season whose relatives feel that he owes them offspring.

But here is where things get extremely weird. Because Sumit agrees with them, seemingly.

“I’m telling you,” Sumit vows in front of his family and the cameras, “I will have children in the future.”

It’s unclear if this is a secret desire that he harbors, or if Sumit is just making this promise in a desperate bid to win back his toxic family.

“It didn’t go the way I was [expecting],” Sumit admitted to Jenny when he returned home.

That is, of course, an understatement.

Though Sumit did not share his surprising promise with her, he did fill her in on the rest of how the meeting went.

With Sumit’s parents unwilling to even meet with him (hardly surprising to Jenny), she has a suggestion.

They could try life in America. They’re married now. He could receive a spousal visa.

Jenny has enjoyed many things about life in India. But she would like to see him give life in America a try.

But, as Sumit sees it, that won’t solve any of their problems.

To him, his family disowning and rejecting him is an ongoing problem that he hopes to resolve.

And he fears that leaving like that, and thus no longer being able to physically meet up with them, will make things worse.

But about that whole vow to have children one day … is he not going to bring that up with his wife?

Apparently not. Not this episode, anyway.

It’s unclear what Sumit has in mind. Jenny is in her sixties and could not conceive even if she wanted to. But Sumit’s keeping quiet for now.

Teaser Watch: Kirsten Carthew Takes Us to an Arctic Wasteland in “Polaris”