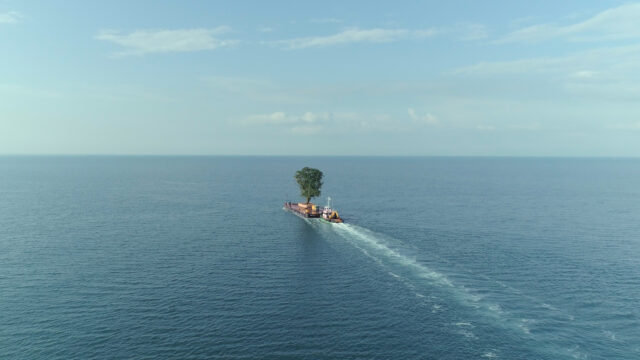 Salomé Jashi was born in Tbilisi, Georgia. Her documentary “The Dazzling Light of Sunset” was awarded the Main Prize at Visions du Réel’s Regard Neuf Competition as well as at ZagrebDox, Jihlava IDFF, Valdivia IDFF, and several other festivals. Her previous work, “Bakhmaro,” received an Honorary Mention for a Young Documentary Talent at DOK Leipzig, was awarded as the Best Central and Eastern European Documentary at Jihlava IDFF, and was nominated for the Asia Pacific Screen Awards and Silver Eye Awards. Jashi is the founder of two production companies: Sakdoc Film and Microcosmos.

“Taming the Garden” is screening at the 2021 Sundance Film Festival, which is taking place online and in person via Satellite Screens January 28-February 3.

SJ: The documentary tells a story of the unusual hobby of a rich, powerful man: collecting century-old trees. He commissions his men to uproot these trees and bring them to his private garden. The route to the garden lies through the sea. And the film observes this process, where uprooting becomes a metaphor, and one person’s desire shakes the country of Georgia’s whole coastline.

SJ: When Georgia witnessed the first transplantation — live or through social media — it blew the minds of many, including mine. I felt as if I had seen a glitch in the real, something I should have never seen. The surreal image of a tree in the sea as it sailed towards the rich man’s garden drew me to film this process and discover what lay behind it.

SJ: This whole process of accumulating trees, some as tall as 15-story buildings, evoked multiple layers of thoughts in me, which I try to lay out in the film.

“Taming the Garden” proposes many directions, which the audience can follow and interpret by themselves. The film is as much a sensual experience as an intellectual one.

SJ: Chasing people and trees was quite a challenge for my crew and me. Trees here speak of power and politics. In a fragile democracy like ours in Georgia, people were afraid to express anything about them or appear next to them. The second challenge was the uncertainty of the shooting schedule. Throughout the two years of filming, it wasn’t possible to plan exact shooting days due to the nature of the transplantation process. If we’d been told that a particular thing would happen on such and such a date, it would usually happen right before or quite some time after the schedule.

The most interesting — in a way enjoyable — challenge was researching locations of dozens of trees and gradually getting access to them along Georgia’s coastline. One other, funny challenge was that most of us in the team were women navigating a totally male world. While some of these men were supportive, we had to brush off attitudes from many of them.

SJ: Most of the financing came from public funding from Switzerland, Germany, and Georgia, plus some international funds and broadcasters. I started fundraising in Georgia, which helped me with research and helped take the film to a certain level to pitch it and attract co-producers, without whom I would not be able to continue filming. First, producer Erik Winker of Germany’s CORSO Film joined in, and then we partnered up with producer Vadim Jerndreyko of Switzerland’s Mira Film after presenting the project at Visions du Réel.

SJ: I have always been a reserved speaker. But I felt I had much to tell. Since my youth, I embraced magical encounters with unexpected images, momentary intuitive connections, which steered intangible feelings. They are like sensual discoveries igniting my heart and running shivers down my neck. When I film, this is the feeling I am looking for.

SJ: The worst advice was probably to study and do something “girly.”

The best advice was to continue filming and be present, which helped me find what I was looking for.

SJ: Women filmmakers from different parts of the world face relatively different issues. The general advice would be to pursue their vision and intuition, to stand on their feet in conversation with male collaborators or protagonists, and to ignore the male gaze they might encounter. Funnily enough, at times there isn’t any gaze at all. It has happened that I would address a male protagonist and he would reply to my male sound recordist instead of me.

SJ: The films that have impressed me are expressed from a female perspective where strong women challenge established norms or structures governed by men, such as Lana Gogoberidze’s “When Almonds Blossomed” and “Some Interviews on Personal Matters.” These films were made during the Soviet Union by a Georgian director. I admire her daring women characters in search of honesty, in search of their true selves.

And Chantal Akerman’s “Je Tu Il Elle” and “Jeanne Dielman, 23 quai du Commerce, 1080 Bruxelles” have enchanted me for their wordless expression when silence ignites much more than any deep conversation.

SJ: We were editing “Taming the Garden” during the first lockdown in Berlin, so the pandemic had little influence on my work. At that time, however, I was happy to have someone helping out with my six-year-old daughter, taking care of her for full days. We are now in Tbilisi, home-schooling because of the pandemic and, being a single mother, it’s quite a challenge to continue working on a regular basis. However, I do take the joy in spending quality time with my daughter and being creative with her.

SJ: Films from Hollywood, especially from earlier years, at times show a ridiculously white world where people of color are only represented as secondary, servile characters. Moreover, rarely can one find a Hollywood film with leading women actresses. And not just in film: even children’s toys are full of stereotypes.

Equality in the film industry is tied to equality in every other discipline — and all aspects of culture and politics. What needs to be broken is the self-affirmed sense of importance of straight white males, who can present themselves with a ridiculous sense of entitlement — and I don’t necessarily speak of the film industry here.

And we, the others — women, people of color, LGBTQ, etc. — need to gain more confidence and empower each other to stand up for our vision. With the new regulations in Hollywood and many European film industries, the equation is changing, albeit slowly. Even if these regulations are pushed for now, they will hopefully lead to natural parity.

Omari Hardwick Stars In ‘Army Of The Dead’ Trailer | Celebrities

Rachel Lindsay Reacts to Chris Harrison’s Apology and His Future With...

Bollywood celebrities that are expecting baby this year | Shreya Ghoshal,...