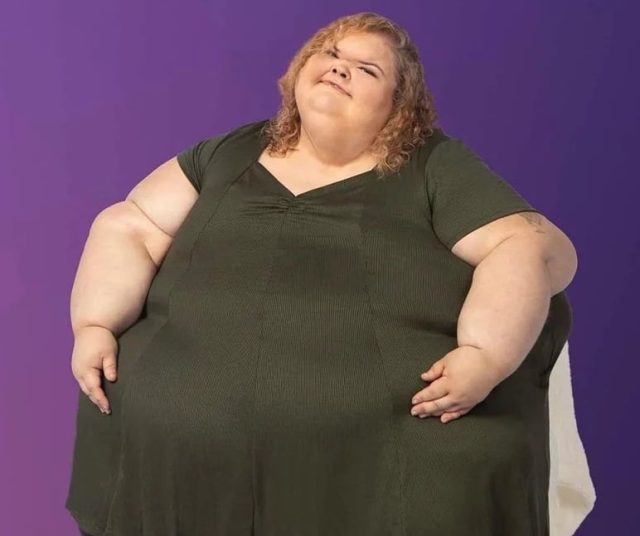 She does, you guys.

She really, really does.

On Saturday, the surprising romantic rumor because a beautiful reality for Tammy Slaton, as the 1,000-lb Sisters star got married at Windsor Lane Rehabilitation Center in Gibsonburg, Ohio.

The long-time TLC personality confirmed the amazing news herself.

“You all knew me as Tammy Slaton, but now you’ll all know me as Mrs. Tammy Willingham,” Tammy told People Magazine after exchanging vows.

We first heard that Slaton was engaged to a man named Caleb two weeks ago.

At the time, an insider told The Sun that Tammy met her fiance inside of the aforementioned wellness center and that the two bonded over their shared history and situation.

“They have a lot of the same struggles that they can share,” this source explained back then, adding:

“They’ve been a huge support for each other [in rehab], which is awesome.”

Slaton, as readers likely know, checked herself into rehab several months ago after a life-threatening health scare forced her into a coma.

This wedding confirmation, however, marks the first time Slaton has mentioned her now-husband in public.

According to People, meanwhile, approximately 30 loved ones attended the ceremony — and, despite previous reports to the contrary, this group did include Tammy’s sister, Amy, who wore an orange gown for the special occasion.

Tammy rocked a white dress and tiara, while Caleb went with a black outfit with brown suspenders.

In late October, Caleb proposed to his spouse in a video shared with The Sun, which went on to write that Caleb intends to move to Kentucky to spend more time with his wife.

It’s unclear when each will check out of rehab, however.

We can also state for the record that Tammy and Caleb’s wedding journey will be documented in a new season of 1000 Lb. Sisters, which premieres January 17 at 9/8c.

Slaton previously had her romantic history documented on the same program, such as last year when she broke up with former partner Philip, who her sister Amy said wanted “her to be a glutton.”

“Tammy told me she broke up with Phil, and I’m like, about damn time,” Amy said on a Season 3 episode.

“Now you need to work on yourself…

I’m hoping with the whole breakup, it don’t deter Tammy away from her weight loss, because she needs to lose this 25 pounds. The doctor gave her a goal.”

Tammy has, indeed, since shed enough weight to qualify for gastric bypass surgery.

She has a new figure and a new man.

We could not be happier for her!

Congrats to the newlyweds!