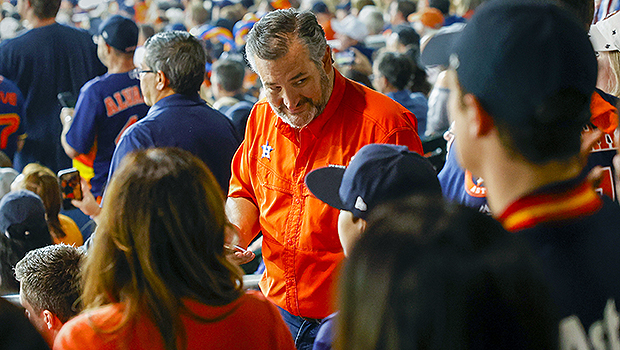 Ted Cruz, 51, had a beer can thrown at him during the Houston Astros parade to honor their World Series win on Monday, and an arrest was made shortly after. The Senator of Texas, who wore an orange short-sleeved shirt and jeans, was riding on a vehicle during the Houston, TX event and videos captured the shocking moment when the can flies right by his head, missing it by only inches and hitting his arm/chest area. He looked shaken up by the incident and the Houston Police Department confirmed that they arrested the individual responsible on their official Twitter account.

“HPD made one arrest during today’s victory parade. A male, 33, threw a beer can at U.S. Senator Ted Cruz as the Senator was on a float in the 2400 block of Smith St. The beer can struck the Senator in the chest/neck area. The Senator did not require medical attention,” the first of two tweets read.

HPD made one arrest during today’s victory parade. A male, 33, threw a beer can at U.S. Senator Ted Cruz as the Senator was on a float in the 2400 block of Smith St. The beer can struck the Senator in the chest/neck area. The Senator did not require medical attention.
1/2

“Nearby HPD officers arrested the male without further incident. He was taken to jail and faces assault charges. We will release the suspect’s name and booking photo here when formal charges are filed,” the second tweet read.

This isn’t the first time the Republican politician has made headlines for being physically or verbally attacked. Just a couple of weeks ago, he was screamed at by climate change protesters in the audience of The View while answering a question about inflation from the show’s hosts. The members apparently used profanity during the shouts and it caused the show to cut to a commercial break.

Ted, who is often under scrutiny due to his career in politics, was also heckled at Yankee Stadium during a game between the New York Yankees and the Houston Astros a few days before his appearance on The View. A Yankee fan shared a TikTok clip of hometown fans swearing and calling out obscenities to him from the stands. Host Ana Navarro even mentioned the incident during his interview. “They gave you a better reception than the Yankees’ fans,” she said before she later took back her comment. “I take back what I said about the Yankees’ fans.”