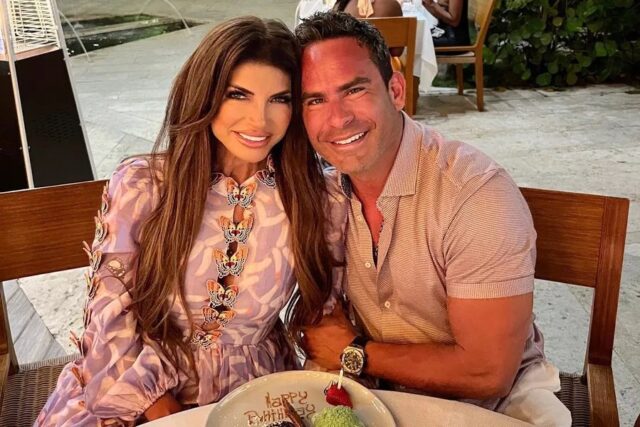 Congratulations are very much in order for Teresa Giudice and Luis Ruelas.

The Real Housewives of New Jersey star exchanged vows on Saturday with her long-time boyfriend at the Park Chateau Estate & Gardens in East Brunswick, New Jersey.

This union marks Teresa’s second marriage, as she was married to ex-husband Joe for over two decades.

The relationship fell apart, however, after both halves of the couple pleaded guilty to financial fraud and spent time in prison… with Joe even getting deported to Italy for breaking federal law as a non-U.S. citizen.

The ceremony on August 6 was filmed for an upcoming Bravo special.

As for the pertinent details?

Luis’s two sons from his previous relationship, David and Nicholas, were also in attendance.

The event was a black tie affair.

Very familiar names and faces who celebrated in person with Giudice and Rueles included:

She and Ruelas said “I do” on Saturday night in front of a heart-shaped flower arch.

The groom donned a white jacket for the special occasion.

There were 220 guests on hand.

“Teresa is on cloud nine,” an insider told E! News ahead of the big day.

“She wanted a fairy tale wedding and that is exactly what she is getting.

“Everything is being done with such precision to make this an unforgettable evening.”

According to People Magazine, Giudice walked down the aisle to violin players and “Ave Maria,” a song chosen to honor of her late parents.

Each of the couple’s children joined them in the lighting of the ceremony’s unity candles, while the ceremony was officiated by Ruelas’s sister, Dr. Veronica Ruelas.

“I will love you for a million tomorrows,” Giudice told her now-husband before their kiss.

For food at the reception?

We’ve heard there a multi-course menu that included “the biggest cowboy steaks” Zarin’d ever seen.

Teresa and Luis started dating in September 2020, not long after the former finalized her divorce.

Giudice has often been forced to stand up against rumors surrounding Luis, insisting to her co-stars and critics that he’s a good person with good intentions.

There was also chatter that the romance was moving too quickly.

In October 2021, Rules popped the major question to the reality star during a romantic trip to Greece.

“My Fiancé you are such a beautiful person inside and out,” Guidice captioned a post via Instagram at the time

“I love everything about you, especially your heart and the way you treat me and my daughters.

“You are amazing in so many ways one thing I admire about you is what a great Dad you are.

“I am so lucky to have found you thank you for coming into my life. I know my parents sent you to me from that day I prayed to them on Bay Blvd. I adore you endlessly.

“You are the love of my life, my soulmate and my everything. I Love you.”

Ruelas, for his part, simply gushed about how he knew Giudice was The One from the nanosecond he laid eyes on her.

“I spent my entire life dreaming of you … everyday without even knowing who you were,” he wrote via Instagram alongside a photo from the engagement celebration.

“These have been the most defining moments of my life and I am eternally grateful to share them with you.

“This is just the beginning of the rest of our lives.”