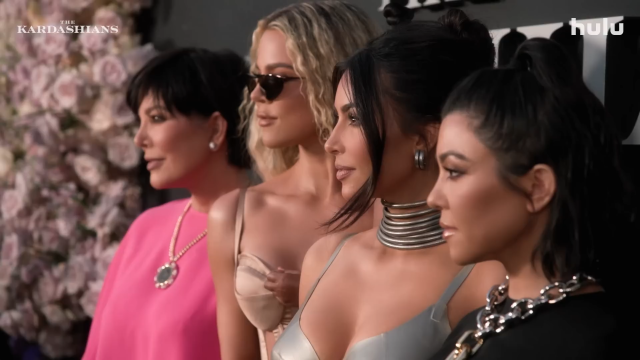 Remember the controversy that Kim Kardashian stirred up for no reason while promoting The Kardashians‘ premiere season?

Well, part of Season 2 will include Kim insisting that she’s not a snob after receiving a lot of backlash.

The new season is just weeks away.

And The Kardashians fans have a lot to which they can look forward. Also? A little bit to dread.

First up, we know that Kourtney Kardashian is once again poised to take center stage.

On Season 1, we saw her engagement to Travis Barker begin with the proposal.

Since cameras captured that moment, the two have gone on to get marry … not once, not twice, but three times.

It is entirely possible that all three weddings will feature in some way on this season.

That means the impulsive Vegas mock-wedding, which likely did not include production.

Then they had the Santa Barbara courthouse marriage. Then, of course, their lavish Italian wedding.

So what can we expect? Any or all of that.

Plus a lot of PDA from the newlyweds.

It’s likely that Travis’ health crisis this summer simply happened too recently to be captured on film. Season 3, maybe?

Then of course comes the most recognizable member of the family, Kim.

She was dating Pete until August, which means that she and Pete were publicly dating for the entirety of Season 2’s production.

At this point, only two things could keep Pete from being front and center in her storyline.

The first thing is taste: if he wasn’t vibing with the show or Kim wanted to keep him in reserve, then maybe we won’t see him much.

That is what kept him off screen (until that voice cameo at the end) during Season 1.

Alternatively, some hasty post-production work could reduce his role dramatically. But it wasn’t an ugly breakup, so … who knows?

That said, Kim may have wanted her narrative to focus upon her independence.

She just got out of a long-term, toxic marriage to Kanye West — a man who launches into public rants at the mere thought of Pete.

So we could see Kim’s legal ambitions, her business career, and more take center stage.

Then, of course, we have Khloe Kardashian.

She has spent the past few years experiencing humiliation after humiliation.

Obviously, she will spend Season 2 discussing Tristan’s latest betrayal and their latest breakup.

Meanwhile, and not unrelatedly, Khloe spent the entirety of Season 2 expecting Baby #2.

She was not pregnant. Baby #2 came into the world via a gestational carrier.

Mostly, we look forward to seeing a lot of True. She’s just so adorable.

Finally, we’re looking at Kylie and Kendall showing up here and there.

The trailer makes it clear that they’ll be delving into mental health.

Kylie’s issues after Baby #2 may be post-partum depression.

Only time will tell. We did already know that she was struggling to “bounce back.”

The season premiere is on September 22.

Donald Trump: I Don’t Know the Neo-Nazi Kanye West Brought to Dinner with Me!