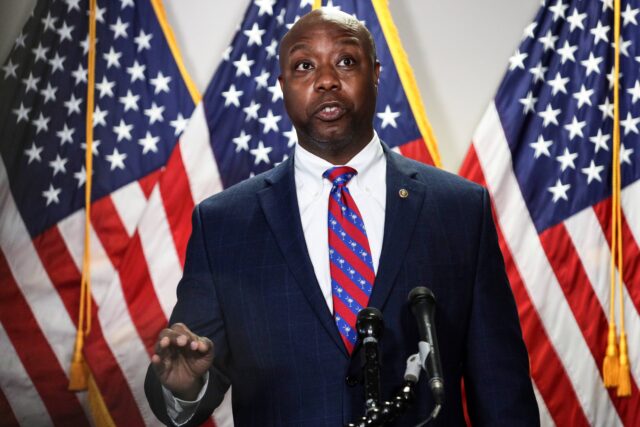 Will Sen. Tim Scott run for president in 2024? The U.S. Senate’s only Black Republican has raised an impressive amount of campaign cash for his Senate reelection bid. It has many people wondering if the South Carolina lawmaker has his eyes on the White House.

Fox News reports that Scott raised nearly $20 million this year. That figure includes $9.6 million during the April to June quarterly fundraising period and $8.3 million for July to September. His campaign team confirmed he raked in 82,000 contributions in the past three months.

The North Charleston native’s profile has risen in the GOP since he delivered the party’s response to President Joe Biden’s joint address to Congress, according to Politico.

Behind the scenes, he is building a network of big and small donors in the party and is handily outraising his colleagues.

In his response to Biden’s address, Scott defended America’s record on race.

“Hear me clearly. America is not a racist country. It’s backwards to fight discrimination with different kinds of discrimination,” he said.

“Race is not a political weapon to settle every issue like one side wants,” he added. “It’s wrong to try to use our painful past to try to dishonestly shut down debates in the present.”

Scott, who first joined the Senate in 2013, was the first African-American senator to win election in the South since Reconstruction.

He has downplayed the buzz about a White House bid in 2024, telling FOX News that he’s focused on reelection to the Senate in 2022, which he said will be his last Senate campaign.

However, his actions suggest that Scott, 56, has bigger political plans in mind. He has visited Iowa and New Hampshire, the first two stops on the road to winning the party’s presidential nomination.

His massive campaign war chest, which continues to grow, also indicates that he has bigger political aspirations.