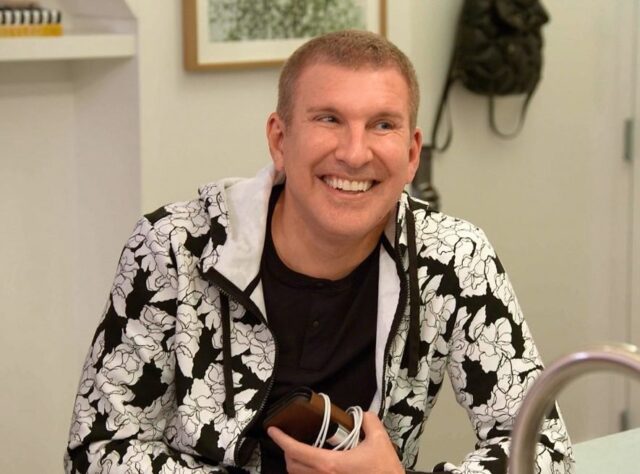 Todd Chrisley and Julie Chrisley will soon be sentenced to many years behind bars.

The veteran reality star, however, didn’t seem overly concerned about his legal fate in his first set of comments about this month’s conviction on tax evasion and fraud charges.

Because Todd seems to think a higher power is behind him.

“It has been a whirlwind,” the 53-year old said during episode of his “Chrisley Confessions” podcast on June 17.

“Lot of moving parts, lot of things going on in our lives and a lot of seeing God’s movements right now.”

To be clear, Todd explained, he cannot delve into the details behind his case at the moment.

He and his spouse were indicted on 12 counts of tax evasion, bank and wire fraud and conspiracy back in 2019.

According to the indictments, the Chrisley deliberately “swindled” at least $30 million from community banks from 2007 to 2012 by inflating their net worth to be approved loans.

The prosecution alleged that the couple actively hid millions they made from the USA Network hit Chrisley Knows Best, as well as $500,000 in taxes Todd owed in 2009.

This form of tax evasion had been going on for over 10 years at the time of the indictment.

“We wanted to let everyone know that it’s a very sad, heartbreaking time for our family right now,” Todd added on Friday.

“But we still hold steadfast in our faith and we trust that God will do what he does because God’s a miracle worker — and that’s what we’re holding out for.”

The Chrisleys do plan on appealing this verdict.

It’s unclear whether God will have much of a say in the eventual outcome, though.

Julie also noted that the pair are “alive and kicking,” emphasizing how appreciative they are for the support they have received to date.

“It’s a tough time right now, but we are grateful for each and every one of you that has taken the effort,” Todd also said, noting a prayer is the “greatest gift” they can receive in lieu of flowers or food. “

“We’re grateful and appreciative of it.”

The stars will likely be sentenced in October, and face up to 30 years in jail.

With her parents reportedly under house arrest (and USA somehow still planning to air Chrisley Knows Best Season 10), Savannah Chrisley commented on the ordeal a few days ago.

“I will continue to stand by my family and fight for justice.

“Justice for ourselves and for others that the system has failed,” she told social media followers last week.

Savannah also went on to mention her faith.

“Recently, I’ve felt let down by God, that my relentless prayers have been unheard,” she wrote.

“But I do believe that He will use every hardship and adversity we go through to strengthen us and prepare us for an even greater purpose.

“So I will continue believing in our Lord and Savior…

“I pray for strength, hope, and love.”

K-Pop SEVENTEEN ft. Sakshma Srivastav | Get to know them like never before |...

Katie Maloney Delves Into Divorce: This is Why I Had to Split from Tom...