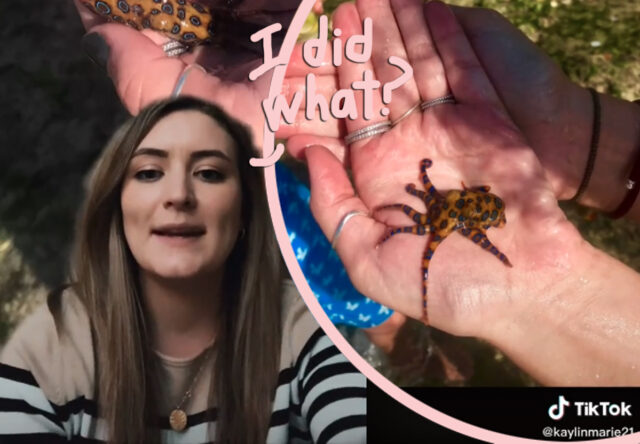 Kaylin Phillips took what she thought was a fun video holding a cute little sea critter — and turned out later to be a close call in which she literally took her life in her hands!

In a viral TikTok video this week, which has been viewed over 9.5 million times as of this writing, she shared the quick version of her brush with death.

The clearly very lucky American tourist was actually in Bali working on a documentary on animal welfare when she and some friends had a couple days off and went to Uluwatu Beach. It was there she recorded the vid holding a tiny octopus on a beach. Later she discovered it was her welfare she should have been worried about — because that little guy was a blue-ringed octopus, one of the deadliest creatures in the world!

The tiny cephalopod — it only grows to about 8 inches max — is native to the Pacific and Indian Oceans. And while it might be cute and pretty, the brightly colored rings should serve as a warning; just one has enough venom to kill 26 adult humans! Yowza!

No wonder, as she captioned her vid, Kaylin was”crying 3 hours later” while telling her dad the story!

In a followup vid after the first unexpectedly got so many views, Kaylin gave more details, saying:

“I remember when we saw this little guy swim up, we picked him up… there were about three of us passing him around, didn’t think anything of it.”

They even picked up a second one! (OMG they’re ALL so lucky!) She admits:

“It wasn’t until later that I found out they were venomous on my Instagram Story.”

She’s lucky that’s the way she found out. The octopus’ bites are so small and painless, victims often don’t even know they’ve been bitten; they just die a few minutes later when their entire respiratory system succumbs to paralysis from the powerful neurotoxin tetrodotoxin and shuts down completely.

When they learned what happened, they all went to a hospital to get checked out. Thankfully no bites!

What’s even scarier about all this? Apparently they’re only really dangerous to humans when they’re provoked, such as by being handled poorly — and you can tell they’re getting ready to bite when their blue rings become brighter and more prominent. And, well, you’ve seen the video — those are some bright rings!

Ch-ch-check out the whole story straight from Kaylin (below)!

Teresa Giudice: Is She About to Be Fired from The Real Housewives of New...