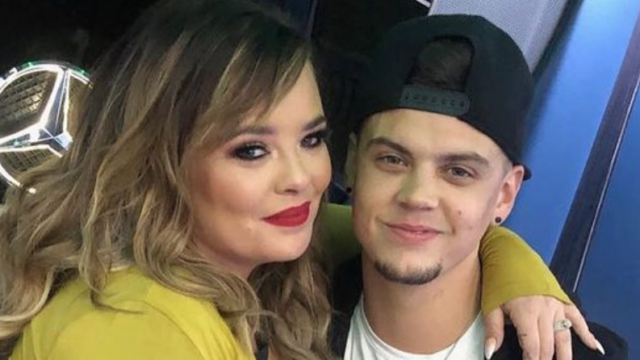 Catelynn Lowell and Tyler Baltierra have been together for 16 years now.

But could that all be coming to an end?!

That’s what some Teen Mom fans are worried about after reading Tyler’s latest poem.

Tyler has been writing poetry for a few years now, and they’re often about his traumatic upbringing and his struggle with mental health.

That’s what this new one is about, too — it was shared in an article on Catelynn’s website about the importance of self-care.

He kicked off the untitled work with “My brain is not normal / my thoughts aren’t desirable / & my desires are uncomfortable.”

“They may all be relatable / But man they’re despicable / I’m so sick of being difficult!” he continued.

Not something you’d really want to hear from your spouse, right?

Tyler wrote “I’m always putting everyone else ahead of me but yet they don’t seem to see / that I refuse to sacrifice for the one person that truly matters which is me.”

He clarified that “I don’t mean to sound conceited but if you don’t love yourself / & ignore all those dreams that just collect dust on the shelf you can never really be any help to yourself.”

He concluded the poem with a bit of advice, writing “So don’t put everyone else ahead of the truth, that realizing the most important one is you if you ever want to win.”

“Because without a healthy you / You will never be any help to anyone in the end.”

The sentiment is fine — it is important to take care of yourself and to put yourself first.

But statements like “My desires are uncomfortable” and “I’m sick of pretending I’m happy” are definitely concerning, right?

And the Teen Mom fans over on Reddit felt the same way.

“If my man was publicly posting this dollar store spoken word sh-t I’d leave him for both of our benefits,” one person wrote.

“He’s loudly crying out for help and she’s loudly ignoring it. Just f-cking end it already guys. It’s not the legacy you think it is.”

“How old is Tyler, 30?” another person asked. “The time for blaming other people for one’s life is long over.”

“He has the time and resources to process those things and be a functioning human, but chooses this Peter Pan nonsense. It’s all on you at this point, my man.”

Another user theorized that “I have a feeling they both feel trapped in their marriage, but they think that’s how it’s supposed to feel and they’re committed to each other any way.”

Some people thought that he could just be struggling with his mental health, and others thought it might be about his relationships with other family members.

Butch Baltierra, his father, is struggling with addiction again after a relapse, and his sister has shown some concerning behavior recently as well.

Whatever is going on with Tyler, it’s clear that he’s going through something serious.

We hope he’s able to take care of himself and do what he needs to do to make himself happy, whatever that means.

Richa Chaddha: "I am an outsider. I will not sleep with you to get...