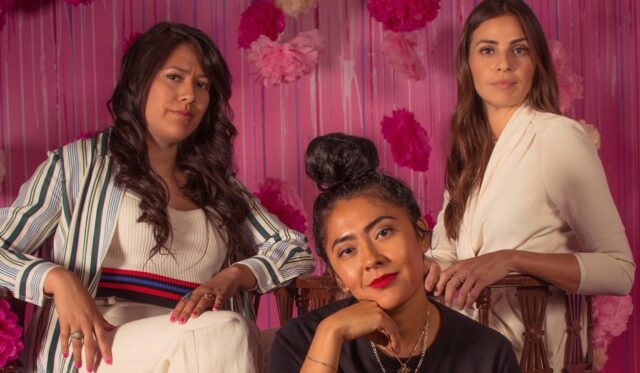 Some content becomes more timely with age, as is the case for “PinkSlipped,” the 2018 web series created by writer, director, and actress Jacqueline Priego. With Chicago as its backdrop, “PinkSlipped” follows the story of three friends caught in jobs dominated by white bosses and colleagues, yearning for the right moment to quit and pursue their own business venture, a blog called “Provocadora.”

In these 10-minute episodes, Priego explores prevalent issues facing Latina women in the workforce with a sense of humor and familiarity. She consciously pushes against the stereotypical ways Latina women are commonly portrayed in the media, as Episode 5, “Friendly Fire,” demonstrates. After being gaslit by her white co-workers, Jacqueline argues back and says, “This is what you all expected right? You all expected some fiery, hot-tempered Latina.”

Priego is not shy to call out problematic behavior and micro-aggressions that impact Latinx communities on a daily basis. In one scene, Jacqueline’s boss thinks she would get along with another coworker simply because she is also Latina. Later in the series, Jacqueline calls out a white colleague with the line, “How about you look up cultural appropriation next time you wear a stupid sarape with your dress?”

The complexity with which Priego treats her characters does not stop with Jacqueline. Elena (Samantha Ramirez-Herrera) and Rosie’s (Ana Ayora) storylines highlight other struggles women, particularly Latinx women, face in the American workforce. After a smoke-break conversation with a fellow employee, Elena discovers she is making far less than her white male counterparts. After efforts to mobilize her office in protest fail, she faces possible termination. Rosie, who is desperate to take the “Provocadora” blog live, is finding it difficult to stay afloat amidst threats of eviction and deportation.

The depth of these women is not strictly limited to their Latinx identity, as can be the case in more superficial representations of diversity. Besides professional drama, Jacqueline, Elena, and Rosie deal with cheating ex-boyfriends, strains on friendships, and internet backlash against their blog. Together, they are “greater than the sum of their stifling jobs, self-sabotage, and cultural stereotypes,” as the web series’ website puts it.

Despite the series lasting just one season, the content is pertinent and deserving of our attention. Priego sat down with “Chicago Tribune” reporter Heidi Stevens in 2018 to discuss “PinkSlipped.” They dug into how the show explores workplace discrimination, tokenization, and immigration politics, handling weighty topics with humor and care. Stevens also dedicated time to discussing wage inequality.

The article was published on November 1, which was no coincidence. As Priego eloquently explained, Latina Equal Pay day is not a celebration. Its date brings awareness to the fact that for Latina women to make the same amount as their white male counterparts earn in a year, they would have to additionally work January-November of the following year. However, the statistics she and Stevens discussed in the interview are from 2018, when Latina women were paid 54 cents to every dollar that went to a white man. By 2022, the disparity had grown, with Latina women making only 49 cents to the dollar.

As Priego admits in an article with Modern Brown Girl, she did not have any formal training in filmmaking or acting, but was driven to write journal entries that would eventually turn into “PinkSlipped” after an emotional therapy session. She “had no intentions of actually developing it into a show,” but having received support from her sister who had connections to the LA film scene, Priego decided to bring “PinkSlipped” to life. Inspired by her and her friends’ lived experiences, Priego ruminates on the notion that becoming a professional is the main way a daughter of an immigrant can honor her parents’ sacrifices. This could mean rising in the ranks of the business world, going to medical school, or becoming a lawyer. Priego voices the realization that “that dream’s imperfect. That dream might not be [her] dream.” However, throwing such a career away to pursue a creative project hardly seemed like an option. The women of “PinkSlipped” are forced to grapple with this.

A story fueled by raw feelings, “PinkSlipped” portrays “a universal story for any marginalized community.”

Check out “PinkSlipped’s” website to view Season 1 and learn more.

Under the Radar offers a chance for us to highlight works by and/or about women that haven’t received big releases or significant coverage in the press, but  are wholly worthy of attention.

Sara & Ibrahim to Kareena & Ranbir, here are the best brother-sister duos of...