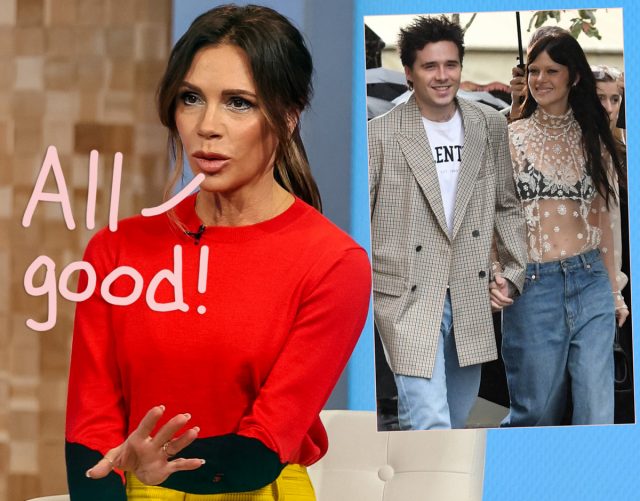 No feud here! At least, not anymore!

Former Spice Girls star Victoria Beckham is doing her best to walk back rumors of a supposed rift between herself and her daughter-in-law, Nicola Peltz. And judging by the A-list pop music vet’s latest social media posts, we’d say she’s doing a pretty good job smoothing things over with Nicola and Brooklyn Beckham. But is this really the true story behind the scenes??

So, as Perezcious readers will recall, we reported late last week on some of the alleged controversy surrounding the 48-year-old fashion designer and her 23-year-old son. In our most recent coverage, former soccer star David Beckham was said to have supposedly taken his son to task over causing such a divisive situation among family members as it related to Peltz, and the pair’s relatively recent wedding.

At the time, an insider told DailyMail.com that David supposedly “read the riot act” to Brooklyn, claiming “we don’t do that in this family” regarding the younger man’s wife and her alleged wedding dress battle with the famous fashion designer.

A source spoke to the outlet about what supposedly transpired behind the scenes, saying:

But now that’s… over and done with?!

On Sunday, Victoria took to her Instagram Stories to post new snaps from her show at Paris Fashion Week. In one of the pics, she shared a shot of Brooklyn and Nicola sitting right along the runway at her show, and captioned it with a very sweet message for the couple:

To have Nicola and Brooklyn sitting front and center at her fashion show is a big deal! Especially since it was fashion that supposedly caused the alleged rift between Victoria and Nicola in the first place, ya know?! Heck, just days ago we reported how Nicola was spotted front and center in another shot from Victoria taken during PFW. They are definitely putting on a united front!

But wait! There’s more! In a second snap, Victoria uploaded a pic of her parents, Jackie and Anthony Adams, alongside the young couple. That pic showed the four family members interacting in a seemingly smooth way, and clearly indicated that there was no rough family split going down during the PFW run.

Plus, other viral TikTok clips appeared to show Victoria being super chatty with Brooklyn following the event. Everything looked normal and relatively calm, there, too, per the Daily Mail.

Soooo does this mean everything is A-OK between Victoria and Nicola (and Brooklyn) now?! Or are there still rift rumors to dispel from here??

What do y’all think about all this, Perezcious readers?! Sound OFF with your take down in the comments (below)…

Colleen Reed and Matt Bolton: Did This Controversial Love Is Blind Couple Wind Up...