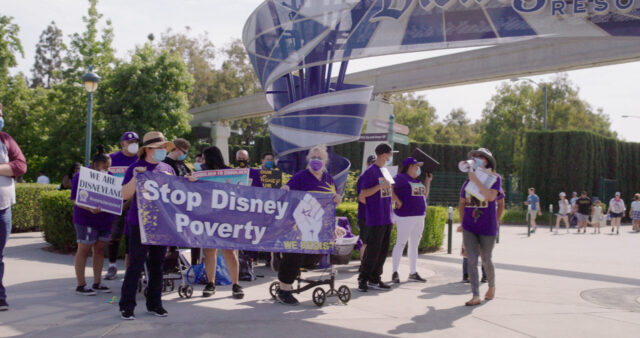 Abigail Disney exposes the darkness behind Disney’s magic in “The American Dream and Other Fairy Tales.” “The film uses the Walt Disney Company as a lens through which to see the dramatic changes in the norms and laws around the American business culture in the last 50 years, changes that have left us with historic income inequality and a deep debt to the American worker,” the filmmaker and philanthropist told us.

A newly released clip from the Sundance doc sees Disney attending a workers’ gathering to learn more about food and housing insecurity among Disney employees. It turns out that working for one of the world’s wealthiest companies is more of a nightmare than a dream.

“How many of you know someone, have someone you know that works at Disney that’s on food stamps?” Disney asks the group. Many attendees raise their hands. They also know Disney employees who have slept in their cars, and ones who didn’t seek medical care because they couldn’t afford it.

Asked what drew her to this story, Disney told us, “I have a deep memory of and respect for how my grandfather, Roy O. Disney, Walt’s brother and co-founder, did business. He was far from a perfect man, and goodness knows there are ways he operated that I wish he hadn’t,” she emphasized, “but on the question of the meaning of work for his employees, he was resolute. Workers should have our respect: they are our partners and if they are doing their jobs then they should be able to raise families and have decent security on the wages they make. I wanted to make a film that highlighted how that has changed and make a more general case for a total moral overhaul of the American system of business.”

Disney said that she’d like audiences to think about “what they do to contribute to the problem by assumptions or expectations they have about low-wage workers. I want them to ask if there needs to be new policies in place, if we have to restore and rebuild our regulatory and antitrust environment, and whether a CEO should sleep well at night when his workers can’t feed their families,” she explained.

“The American Dream and Other Fairy Tales” hits select theaters September 23. Disney co-directed the film with Kathleen Hughes. The pair previously collaborated on “The Armor of Light.”