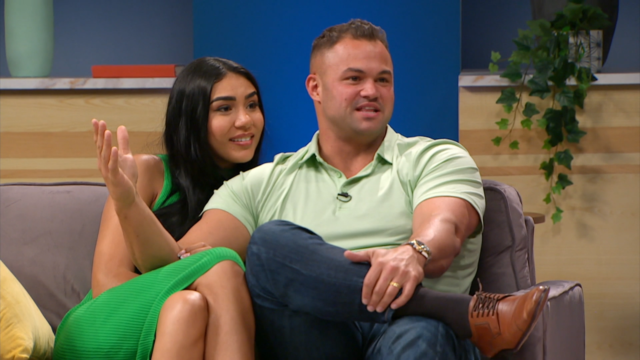 What exactly does Patrick Mendes do for a living?

Even before the 90 Day Fiance Season 9 Tell All Part 1, it was a hot topic of discussion.

But Patrick also brought it up

Is his company legit? Is Patrick part of a pyramid scheme?

Patrick and Thais fared better than many couples do when they are under the Tell All spotlight.

Yes, they announced their happy pregnancy news. Yes, they opened up about past issues, including trust and communication.

Thais’ father tuned in to address the couple and the news that he is expecting a grandchild.

Patrick’s brother John even stopped by.

Though … he spent most of his screen time so far clashing (hilariously) with Jibri Bell.

We cannot stop hearing him say “spah-kles” in our heads.

However, what may have been Patrick’s biggest moment was when the focus fell upon Bilal Hazziez and Shaeeda Sween.

Bilal has been deflecting criticism all season, and has now even taken to policing Shaeeda’s words when she refers to his “lectures.”

When his castmates spoke to him, Bilal would carefully redirect conversations, often beginning with an apology.

This is, of course, a manipulation tactic. “Sorry” can be a weapon or a tool in conversations.

Patrick straight-up called out Bilal on it.

He noted that Bilal is a salesman and acknowledged that, as a salesman himself, he was in awe seeing a master at work.

Patrick’s words were very accurate. But the backhanded compliment got viewers thinking.

What exactly does Patrick do for a living?

He is no longer a weightlifter, as he received a ban from the sport after testing positives for HGH and for steroids.

Instead, Patrick works for a smart-home security system company. The company’s name is Vivint.

As we know, Patrick has had to do a lot of traveling for the job, but now works as a regional manager.

His hard work has paid off, as he apparently makes a lot of money.

Patrick at one point characterized that his trips to Brazil meant missing “$1000 a day” at work.

That does not necessarily mean that he always makes $1k on each workday. Some jobs, as we know, are seasonal.

But whatever his income, Patrick is clearly doing well for himself.

Though many view Tesla as disreputable due to a number of issues (including the company’s owner), they still enjoy something of a reputation as nice cars.

Patrick drives one, and charges it in his driveway. This was true in Austin and Dallas, and likely in Vegas where they are now living.

Speaking of residences, Patrick has also lived in nice houses.

No matter what he claims to the camera, no one believes that he needed John’s help paying rent.

(Many if not most fans believe that he helped John out, giving him a place to stay and helping him get a job at the same company)

So Patrick works for a security company. He’s a regional manager and a salesman. And he’s making bank.

But … what sort of company is Vivint?

This is an important question, in part because online rumors have accused the brand of two things.

One is of shady behavior to “help” clients purchase their products — using other people’s credit information to help them qualify for financing.

This isn’t a rumor, really. There’s a $20 million settlement and an FTC report about this one.

Obviously, this likely has nothing to do with Patrick specifically.

The other rumor, however, could be a bit more relevant.

This is a more complicated question, and you will find different takes on the internet as a result.

However, pyramid schemes (or multi-level-marketing) are predatory business structures with several key signs.

From reading up, it sounds like Vivint isn’t necessarily an MLM/pyramid scheme. It does place a strong emphasis upon recruitment, but reportedly has a traditional sales structure.

That said, there are entire articles and sites dedicated to why some people dislike the company. It sounds like it’s pretty polarizing.

But … since it doesn’t seem to be a true pyramid scheme, that does not reflect poorly upon Patrick.

The guy’s not perfect. But we’re happy for him, Thais, and for their future child — due in November, the same as Kara and Guillermo’s baby!

Wendy Williams Leaves Rehab: I’m Back and Better than Ever!