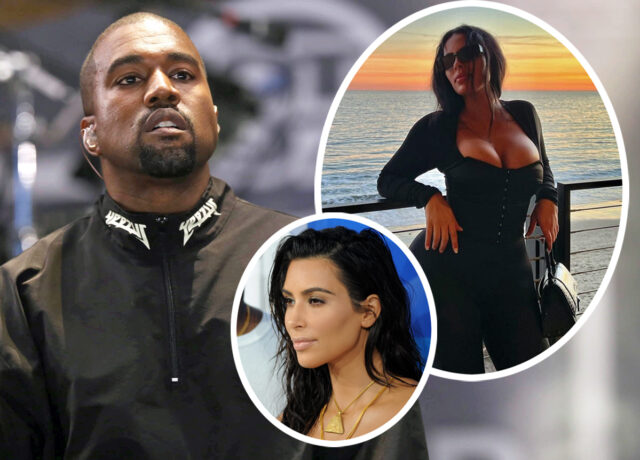 Kanye West was nowhere to be seen at Sunday night’s Grammys just weeks after he was pulled from the performance lineup, so where was he celebrating his two wins? (He took home the award for Best Melodic Rap Performance and Best Rap Song, fyi.)

In EXCLUSIVE details shared with us on Monday, a source revealed that the rapper went on a relaxing and romantic weekend getaway with his Kim Kardashian lookalike girlfriend Chaney Jones. Together, the two hit up The Stonehouse restaurant on Friday evening at around 8:40 p.m. where they enjoyed a “candlelit dinner,” the insider explained:

“Kanye and his new girlfriend were smiling over a candlelit dinner. They seemed to be laughing and were polite and kind to staff. The couple were side sitting and were not there for long.”

Despite the festivities going on in Las Vegas ahead of the award show, Ye was apparently in low spirits, or so it seemed, as the confidant noted to us:

Hmm. Perhaps he was contemplating his last minute decision to skip Coachella?

That’s not to say he didn’t have some fun celebrating his achievements, though. According to DeuxMoi, the couple headed to another restaurant on Sunday night, this time The Black Sheep where they finished the weekend off with a tasting menu and dessert that read “congratulations.” Sweet!

So, what did the duo get up to on Saturday? There seems to be no word on that which has us wondering if this getaway was more to please Kim than her lookalike! Over the weekend, a source opened up to Page Six about the 44-year-old’s relationship with his ex-wife, which has been rocky these last few months after Ye made a habit of bashing her and her beau Pete Davidson online.

The source seemed positive that change was coming and even insisted that the Yeezy designer had plans to “go away somewhere to get better.” They revealed:

“For the sake of the kids, Kanye has told Kim he’s not making any public appearances or inflammatory social media statements, and he will go away somewhere to get better.”

His promise not to make “any public appearances” certainly accounts for his Coachella dropout and why he would have ditched the Grammys. Could it also mean that these romantic dinners were just relaxing ways to end the day after he received some form of treatment? And NOT a chance for more paparazzi date pics? Maybe so!

The Page Six source didn’t give any specific details about what kind of treatment the Donda vocalist has begun to seek out, so it stands to reason that he could have spent the weekend meeting up with a professional and hanging out with his lady afterward. After all, the source did insist that he’s “committed to a healthy co-parenting relationship with Kim” and “focused on raising their beautiful children.” Why wait to get help if he’s already made up his mind on that?

But it is clear for anyone wondering, no, Ye did not check himself in anywhere for help.

Who knows though — perhaps this was really a way to take his mind off getting disinvited from the Grammys stage for his controversial behavior as of late. What do YOU think, Perezcious readers? Sound OFF in the comments (below)!

Kylie Jenner Back In Gym 6 Weeks After Birth – But Reveals Postpartum Body...

Michelle & Anna Duggar Defend Josh: He’s a Good Guy! He Deserves to Be...