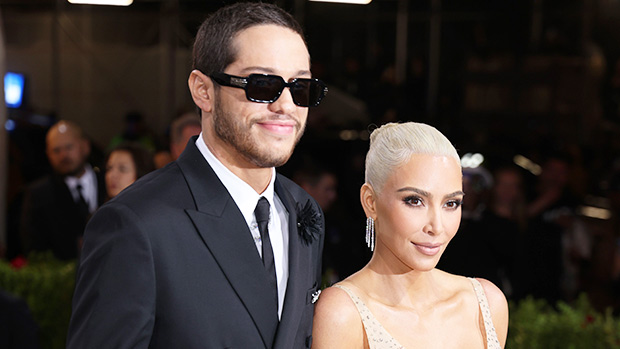 Kim Kardashian got all glammed up to attend the premiere of season one of The Kardashians during the show’s Oct. 27 episode. While getting ready, a producer asked Kim who her date to the big event was, and Kim confirmed that Pete Davidson was accompanying her. However, she explained that they wouldn’t be walking the red carpet together. “I’m going to walk it with my sisters,” Kim revealed. “This is my thing. He’s just going to support.”

At the time of the April 2022 premiere, Kim and Pete had been together for about six months, but had yet to make an official public appearance together. He also had yet to appear on The Kardashians, except via phone calls. “When the camera’s up for him, it’s like a skit or a role. [This is] not what he does,” Kim explained. “I’m obviously going to talk about what goes on in my life, and he’s a part of that. But I also respect that this is my job, and it isn’t his job. So you might get a glimpse here and there but it just…it is what it is.”

A trailer for the show’s second season previously revealed that Pete will quickly pop up during the upcoming Met Gala episode. Pete and Kim walked the Met Gala red carpet together in May 2022, and in behind-the-scenes footage, Kim asks Pete if he wants to hop in the shower with her after the event. He can be seen racing towards Kim in a quick trailer clip. Aside from that, though, it does not appear that Pete will show up on the docu-series.

Kim and Pete wound up breaking up in August 2022 after less than ten months together. At the time, Pete was filming a movie in Australia, and Kim had just recently returned from visiting him down under. Kim has stayed true to her promise to talk about the relationship on The Kardashians, though, so it’s likely that we’ll get a bit of a glimpse into the breakup when future episodes air. However, the show is currently airing episodes that were filmed six months ago, and season 2 is already more than halfway over, so it might be a wait until season 3 for this one!