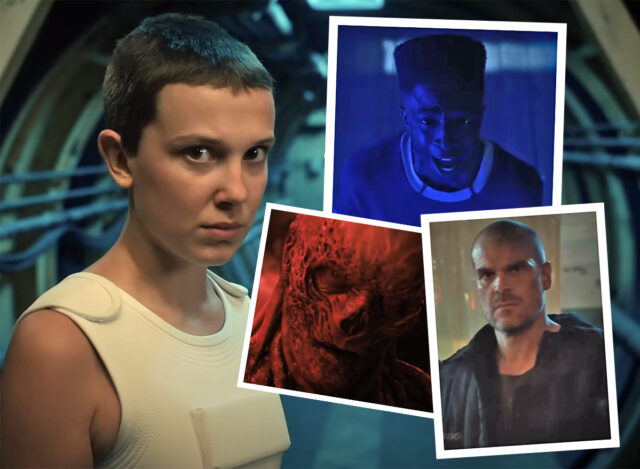 Stranger Things season 4 has come and gone — but that doesn’t mean the behind-the-scenes secrets are stuck in the Upside Down!

The Netflix show’s writers have already taken to Twitter to reveal that some of the most emotional moments of the latest season weren’t even penned in the script! Whaaat?? It was the actors’ good instincts that had us all bawling!?

Obviously, major spoilers ahead so read with caution!

Paying tribute to Hawkin’s unsung hero Eddie Munson, the ST writer’s room revealed on Saturday that Joseph Quinn actually improvised the “I love you, man” line. You know, one of the last things Eddie said to his bestie Dustin (aka Gaten Matarazzo) after his Demobats battle. Stop, that’s adorable!

“I love you, man” was improvised by Joe pic.twitter.com/z5gYyl18KF

Sweetly, in an interview with E! News, Joseph insisted that while he may have improvised some lines, “all the good bits” should be credited to the writers.

Another one of the show’s best moments was when Winona Ryder and David Harbour’s characters embraced for a kiss before a risky fight with the Demodogs in the Russian prison. It seemed like such a natural moment for the pair who had already gone through hell and back together, but it wasn’t scripted either! The writers shared:

“This kiss wasn’t scripted, Winona and David added it on the day of filming.”

This kiss wasn’t scripted, Winona and David added it on the day of filming pic.twitter.com/9vSWwYliWU

Wow! That was such a precious moment, too!

That brings us to one of the most devastating scenes of Vol 2 — when Lucas sobbed over Max’s (Sadie Sink) body after she was nearly killed by Vecna (Jamie Campbell Bower). Turns out Caleb McLaughlin also came in clutch during that heartbreaking moment by coming up with the line, “Erica, help,” which was said as he called for his sister’s help.

Related: David Harbour ‘Hated’ The Stranger Things Dog He Wanted It KILLED OFF!

So, not only are these actors super talented at bringing the page to life, but they’re also pros at writing, too! Can you imagine any of those scenes without these important add-ins??

Speaking of bringing stuff to life, Vecna’s super spooky voice also proved how talented this cast is! According to the writers, no special effects were used to create Jamie’s deep and raspy voice. They even recorded a clip of the actor in the recording studio to prove it — listen!

How good is Jamie? pic.twitter.com/R5TqsqqbOm

SO scary! Jamie nailed that!

With the final season of Stranger Things next, creators Matt and Ross Duffer are keeping their lips sealed about what fans can expect to see as they prepare to say goodbye to the adventurous gang. Chatting on the Happy Sad Confused podcast, they did confirm that the finale is expected to be “feature-length” but shorter than episodes eight and nine. They also plan to set the story primarily in Hawkins. As for how much the cast will get to improvise this time, we’ll have to wait until the epic conclusion is released! Are you surprised these parts weren’t scripted, Perezcious readers?!

Kardashians REACT to Headlines Getting ‘So Out of Hand’

Meri Brown: I Love My Life! Seriously! For Real!