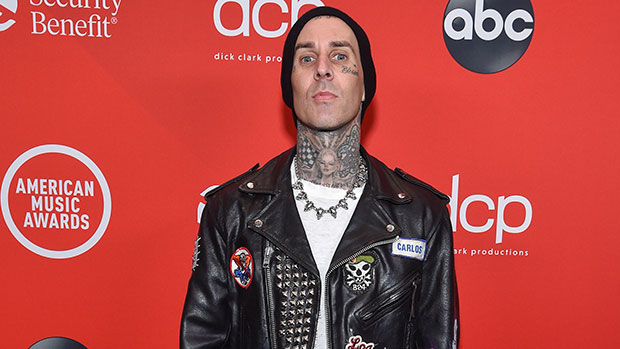 Travis Barker has reportedly been discharged after six days in the hospital. “Travis has now been discharged and is at home as he continues to recover with the support of his family on July 4th,” a source told The Sun on Monday, July 4.

The drummer, 46, was hospitalized for pancreatitis June 28. He was initially taken to West Hills Hospital, near his Calabasas, California home, but then transferred to the larger Cedars Sinai Hospital in Beverly Hills. His wife Kourtney Kardashian, 43, was seen closely following the ambulance transporting Travis in photos.

Travis later confirmed that the sudden and life threatening attack — which is the inflammation of the pancreas — was brought on by a recent colonoscopy that lead to the removal of a small polyp. “I went in for an endoscopy Monday feeling great,” he wrote via his Instagram story on Saturday, July 2. Hours later, things took a turn.

Travis Barker gives an update from the hospital
Get well soon @travisbarker pic.twitter.com/1Xpl0XkuPm

“But after dinner, I developed excruciating pain and have been hospitalized ever since,” he explained. “During the endoscopy, I had a very small polyp removed right in a very sensitive area, usually handled by specialists, which unfortunately damaged a critical pancreatic drainage tube. This resulted in severe life threatening pancreatitis. I am so very very grateful that with intensive treatment, I am currently much better,” he said to his millions of followers.

Kourtney, who married Travis in Portofino, Italy in May, also posted a statement. “Oh what a scary and emotional week it has been,” she said shortly after Travis’ post. “Our health is everything and sometimes we take for granted how quickly it can change,” she explained.

“Travis and I went in for a routine endoscopy together and he ended up with severe, life-threatening pancreatitis,” she explained. “I am so grateful to God for healing my husband, for all of your prayers for him and for us, for the overwhelming outpouring of love and support…I am so touched and appreciative. I am so so thankful to our specialists, doctors and nurses at Cedars Sinai for taking such wonderful care of my husband and me during the stay,” the Poosh founder also said.