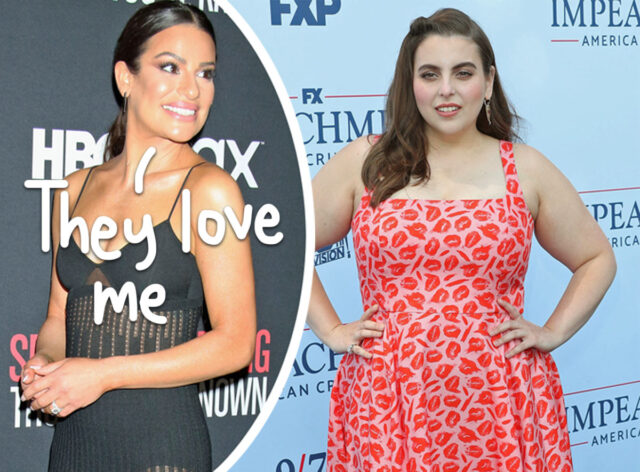 Funny Girl producers are attempting to clear the air!

Ever since Beanie Feldstein announced her very early exit as Fanny Brice in the revival of the Broadway show, various insiders have come out of the woodwork claiming that the leading lady was “basically fired” after poor ticket sales and bad reviews. One Page Six source even claimed producers had been “blindsided” by Beanie’s social media post confirming her exit — but, of course, they announced Lea Michele’s casting the next day, so that seemed a little doubtful.

Now the producers are speaking up — and claiming there was nothing shady about this recasting at all! Hmm.

In a statement to People on Wednesday, the producers and a representative for the actress shared a joint statement detailing exactly what led to her upcoming July 31 departure. As Perezcious readers know, she made her Funny Girl debut in April (supposedly with a year-long contract). After missing a few shows, including when she got COVID, the production and star announced in mid-June that her last performance would be on September 25, the same time her co-star Jane Lynch was set to depart. But then her last performance got bumped up even earlier, so, what’s going on?! The statement began:

“The producers of Funny Girl were not blindsided by Beanie’s social post. The producers decided to take the show in a different direction and end Beanie’s contract on September 25th, 6 months earlier than anticipated.”

There’s that “different direction” reasoning again — almost word for word with what the 29-year-old said when she announced her early exit! That said, a “well-placed” source for RadarOnline wasn’t buying the amicable exit narrative, saying:

“She signed a year contract but after the negative reviews and huge drop in ticket sales, producers asked her to leave in September when Jane Lynch was scheduled to leave. They were doing her a favor, letting her leave when Jane left so it wouldn’t look like she was fired.”

Seems Beanie ultimately didn’t care about the optics because she decided to cut out even earlier than the six-month mark, the producers’ statement continued:

“A month after that decision, Beanie decided it was best for her to leave on July 31st. The producers were aware of and in support of her decision. The producers and Beanie worked on this together professionally, respectfully and graciously.”

We have to think things must have been terrible behind the scenes for her to change her mind so quickly and leave months early!! But a source also told the outlet that this was “a very smart financial decision” for the production, adding:

“You could not overcome the reviews and the lack of the Tony nomination.”

The production only received one nom in total, for featured actor Jared Grimes. Definitely a tough blow! Yet, another insider doesn’t think the critical reception played into Beanie’s decision at all, arguing:

“Regardless of how the show was received, Beanie was committed to playing the role through the entirety of her contract.”

Beanie might not have cared, but those around her certainly did!! And maybe for good reason because the ticket resales are going off the charts now that the Glee alum is set to take over the show. According to RadarOnline, prices have drastically risen since Monday’s casting announcement, which will see the Glee alum take on her “dream role” just like she did in the musical series. Anyone wanting to see Lea on stage better be ready to fork over hundreds if not thousands for a seat!! Yes, really!

On SeatGeek, verified resale tickets for opening night (September 6) are now going for $570 to $2,250. The most expensive seat is a shocking $2,500 — and that doesn’t even include taxes and fees! Damn! That’s compared to the mere $69 fans will have to pay to see Beanie until the end of the month. Wowza. That’s a massive difference!!

While Funny Girl might be able to rise above the controversy, at least financially (despite hiring a controversial star), one of RadarOnline’s insiders doesn’t think the Booksmart alum will have as much luck, insisting:

“She will never work on Broadway again.”

That’s harsh! We sincerely hope that’s not true! This role may have ended with a s**t storm but we don’t think that should mean Beanie never gets another chance. But what about U, Perezcious readers? Sound OFF (below)!