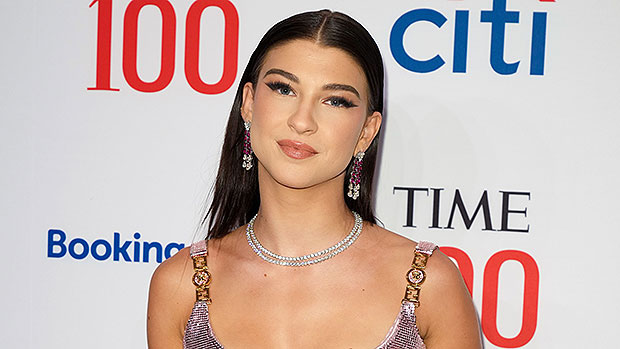 Phoebe Gates, 19, the youngest daughter of Bill Gates, 66, and his ex-wife Melinda, 57, has a new love in her life! The soon-to-be Stanford sophomore shared a PDA-filled picture of her and her unidentified love interest on her Instagram Story on July 7, which showed him sweetly kissing her right cheek. The man, who had a gray shirt on and accessorized with a diamond earring and necklace, seemed to be sweeping Phoebe off her feet as she blushed and closed her eyes as she received the affection.

Phoebe has not posted any other glimpse of her seemingly new relationship online. Instead, she’s been focusing on speaking out against the Supreme Court’s decision to overturn Roe V. Wade on June 24, the landmark case that constitutionally protected a women’s right to abortion. Before the decision was officially placed into law, a move that many considered to be a huge step back for women’s rights in America, Phoebe took to her page in a white string bikini to protest. “I’m not shy about my body and/or telling you to keep your bans off of it,” she began in her caption. “Every person deserves access to sexual and reproductive health care. Right now, the Supreme Court is prepared to end the constitutional right to abortion. Join me and millions of other women in our fight for this basic human right. @PlannedParenthood #BansOffOurBodies.” She also shared an infographic to encourage others to take action by donating to their local Planned Parenthood or simply speaking out against the upcoming decision.

Shortly after Roe V. Wade was reversed, Phoebe shared a video of herself motivating people to transform their anger into action. “I’m devastated and furious at this ruling. This issue, like many others in this nation, is an issue of privilege and inequality,” she noted. “I know a ton of us are feeling different emotions right now …We need to take these emotions and channel them into action. We can donate to local abortion funds and we can center around the voices that weren’t amplified within the fight.”

Phoebe, who studies public policy at Stanford, also spoke about her desire to fight for and eventually regain a woman’s right to choose what she does with her body in an essay for Vogue. In her writing, she admitted she was “blind” to what really mattered when making policy. “The problem was never that we didn’t share enough compelling stories or appalling statistics. One more viral Gloria Steinem or RBG quote wouldn’t have saved Roe,” she penned. “This wasn’t about persuasion at all. It was about power. The wrong six people were in positions of authority. And they are why women lost the right to choose.”

If one thing is for sure, it’s that Phoebe’s new man has a determined and powerful woman by his side!

Mena Suvari on Why Being Pregnant at 41 Feels SURREAL (Exclusive)